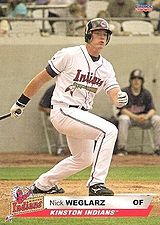 Nick Weglarz was a Cleveland Indians minor leaguer. He was a member of the 2004 and 2005 Canadian Junior National teams.

Weglarz was 14 for 25 with 4 doubles, 5 home runs and 16 RBI in high school in 2005. The Cleveland Indians took him with the 94th pick overall in the 2005 amateur draft, 4 selections after the only Canadian taken before him, Chris Robinson. Nick was the first of two third-round picks by Cleveland that year.

After signing with scout Les Pajari, Weglarz had an indifferent debut with the Burlington Indians, hitting .231/.313/.347 in 41 games. Tendonitis sidelined him for almost all of 2006, as he was 0 for 2 with 2 strikeouts for the GCL Indians.

Healthy again in 2007, Weglarz hit .276/.395/.497 with 23 home runs for the Lake County Captains and was 1 for 7 with a homer and a walk with the Kinston Indians. He was 6th in the South Atlantic League in home runs, 8th in OBP and 10th in OPS. Baseball America rated the 19-year-old Cleveland's #6 prospect. In the 2007 Baseball World Cup, he split left field duties for Team Canada with veteran Jeremy Ware and turned in an excellent performance - 5 for 11, one walk, 2 doubles, a triple, 5 runs and 3 RBI in five games.

He remained with Canada for the 2008 Final Olympic Qualification Tournament and was excellent. He hit .450/.577/.950 with 8 runs, 7 RBI and 3 home runs in 7 games, mostly in left field. He helped Canada win a berth in the 2008 Olympics, crediting Rob Ducey with helping his approach at the plate. He finished 6th in the event in average, led in home runs, was 7th in RBI and 6th in runs. Canada's youngest player, he easily outperformed outfield mates and former major leaguers Ryan Radmanovich and Adam Stern.

Weglarz was one of the top performers in the 2008 Olympics but Canada went just 2-5 with all five losses coming by a single run. Nick hit .400/.423/.720 with 2 doubles, 2 homers, 5 runs and 5 RBI in 7 games as the starting left fielder. His best show came against Cuba, going 4 for 4 with 2 homers, 3 runs and 3 RBI in a 7-6 loss. In the preliminary phase, Weglarz was 6th in average, third in slugging (behind Alexei Bell and Dae-ho Lee) and tied for second in home runs, one behind Dae-ho Lee and even with Bryan Engelhardt, Chih-Sheng Lin, Alfredo Despaigne and Mike Saunders.

In 2008, Weglarz hit a disappointing .272/.396/.432 with only 10 homers for the Kinston Indians. Baseball America still rated him as the #4 prospect in the Carolina League behind Matt Wieters, Jake Arrieta and Gorkys Hernandez and just ahead of Beau Mills. He was named to Team Canada for the 2009 World Baseball Classic and was the team's starting left-fielder, hitting seventh in a line-up packed with major leaguers. Manager Ernie Whitt mentioned his excellent batting eye as the reason for his making the starting line-up. Weglarz drew two walks in Canada's opening game against the USA.