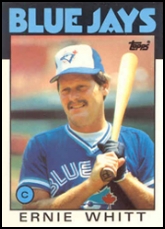 Catcher Ernie Whitt played fifteen seasons in the majors, mostly with the Toronto Blue Jays, and hit 134 home runs during his career. He later was a big league coach and minor league manager. He also managed Team Canada to two Gold Medals in the Pan American Games.

Whitt was selected by the Boston Red Sox in the fifteenth round of the 1972 amateur draft. He hit .290 with the Winston-Salem Red Sox in 1973 and was sixth in the Carolina League in batting average. After five seasons in the Red Sox chain, he earned a September call-up to the Red Sox in 1976. Facing the Milwaukee Brewers on September 21st, he hit his first big league home run off pitcher Jim Colborn.

Whitt was then picked by the Blue Jays in the 1976 expansion draft. After cups of coffee with Toronto in 1977 and 1978, he was in the majors for good with the team beginning in 1980. On May 15, 1981, he made the final out of Cleveland Indians pitcher Len Barker's perfect game.

For all of the 1980s, Whitt saw regular action for the Jays, splitting time behind the plate with Buck Martinez and hitting double figures in homers for eight straight years starting in 1982. He appeared in the All-Star Game in 1985, when he hit 19 home runs. Following Martinez's departure, he had his best season in 1987, when he hit .269 with 19 homers and 75 RBI.

Whitt was dealt to the Atlanta Braves following the 1989 season but hit just .172 with 2 home runs as Greg Olson's backup for the team in 1990. He spent part of 1991 with the Baltimore Orioles before being released in mid-season, ending his career.

After his playing days, Whitt was the roving minor league catching instructor for the Blue Jays from 1997 to 2004 and also spent part of 1997 as manager of the Dunedin Blue Jays. From 2005 to 2007, he was bench coach for Toronto, and in 2008, he was the team's first base coach until June 20th, when he was fired alongside manager John Gibbons. He was then skipper of the Clearwater Threshers in 2009 and the Philadelphia Phillies' minor league catching coordinator in 2010 and 2011.

He was inducted into the Canadian Baseball Hall of Fame and Museum in 2009.