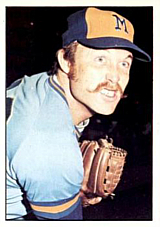 Jim Colborn was a major league pitcher from 1969 to 1978. He started with the Chicago Cubs but came into his own after being traded to the Milwaukee Brewers before the 1972 season. He was the first 20-game winner in team history in 1973 when he went 20-12, 3.18, making the All-Star team. He pitched over 200 innings for five straight seasons. Jim was traded to the Kansas City Royals before the 1977 season with catcher Darrell Porter for Bob McClure, Jamie Quirk and Jim Wohlford. He went 18-14 and pitched a 6-0 no-hitter over the Texas Rangers on May 6th. He was not used in the postseason as manager Whitey Herzog preferred to go with lefties in the ALCS against the New York Yankees, tagging Paul Splittorff, Andy Hassler and Larry Gura for four of the five starts with 20-game winner Dennis Leonard the sole exception. Colborn was sparsely used at the start of the 1978 season, until he was traded to the Seattle Mariners for Steve Braun. He made his starts the rest of the way, but was only 3-10, 5.35 and was released at the end of spring training 1979, ending his career.

He served as pitching coach of the Iowa Cubs from 1984 to 1986 and was the Chicago Cubs' minor league pitching coordinator from 1987 to 1989. Moving to Japan, he was the pitching coach of the Orix Blue Wave in 1990-1993. Colborn managed in the Oakland A's system from 1994 to 1996, then was director of Pacific Rim scouting for the Seattle Mariners from 1997 to 2000. He was the pitching coach for the Los Angeles Dodgers from 2001 to 2005. After the Dodgers fired manager Jim Tracy, Colborn followed Tracy to the Pittsburgh Pirates, where he was named pitching coach on November 1st. On July 16, 2007, Colborn got into a shouting match with shortstop Jack Wilson. Wilson and two outfielders had converged on a ball and Wilson had attempted a leaping catch, resulting in a two-base error. Colborn was let go after the season, having been criticized for his adjustments of pitchers Zach Duke, Paul Maholm and Josh Sharpless, all of whom declined under his tutelage. Colborn moved to the Texas Rangers in 2008 as coordinator of Pacific Rim Operations; his title in 2013 was Senior Advisor, Pacific Rim Operations. He was pitching coach of the Sydney Blue Sox in the 2015-2016 season. As a scout, he signed Cha Seung Baek, Travis Blackley, Shin-Soo Choo and Nick Urbanus.

Jim appeared in the 1999 movie For the Love of the Game as the Tigers third base coach.