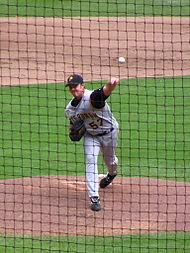 Pitcher Zach Duke was selected by the Pittsburgh Pirates in the 20th round of the 2001 amateur draft. He was signed by scout Grant Brittain in July but did not pitch that year. In 2002, Duke broke onto the scene with a fine 8-1, 1.95 year for the GCL Pirates, allowing only 38 hits in 60 IP (opponents batted .185). He led the Gulf Coast League in wins and Baseball America named him the #19 prospect in the GCL.

In 2003, Zach had an okay year with the Hickory Crawdads (8-7, 3.11). The next season, Duke emerged as a serious prospect. He had a 10-5, 1.39 line for the Lynchburg Hillcats and 5-1, 1.58 with the Altoona Curve for a composite 15-6, 1.46 ledger. He had 17 games in a row in which he allowed two or less earned runs. He was named the Pirates minor league player of the year, had the lowest ERA in the minors (.56 less than runner-up Ben Hendrickson), was rated the top pitching prospect in the Carolina League by Baseball America (which also said he had the best breaking pitch in the circuit) and was a Carolina League All-Star and pitcher of the year. Baseball America picked him as the 8th-best prospect among left-handed starters, the #4 prospect in the Carolina League and #6 in the Eastern League, two spots ahead of Ryan Howard. His fastball was timed in the low-to-mid 90s and he also added a superb curveball, sinker and changeup.

Duke was again the Pirates minor league performer of the year in 2005, going 12-3 with a 2.92 ERA and 23 BB in 108 IP for the Indianapolis Indians. Baseball America rated him as having the top control in the IL and as the #3 prospect in that league, behind Delmon Young and Francisco Liriano and just ahead of Howard. Duke won IL pitcher of the year honors, made the league All-Star team and again missed an ERA title solely due to inning limits. He had gone 43-17 in his minor league career. He was picked for the 2005 Futures Game but could not pitch as he was called up to Pittsburgh.

Zach started 2006 on an awful note for a player who had been so dominating the two prior years. During spring training, new pitching coach Jim Colborn decided to change Duke's mechanics and the results were horrendous. At the All-Star break, he was only 5-8 with a 5.17 ERA. He improved after that (5-7, 3.65 in the second half), rediscovering his control to a fair extent. He allowed a whopping 60 doubles that year and righties hit .310 against him. He tied for third in the 2006 NL in losses and led in hits allowed (255), though his ERA+ did finish at 100, exactly league-average and above-average for a starting pitcher.

Duke had another rocky year in 2007. He went 3-7 with a 5.79 ERA and .364 opponent average through the end of June. He was again leading the league in hits allowed. Duke was placed on the disabled list for irritation of his ulnar collateral ligament and Shane Youman was promoted to fill his spot in the rotation. He finished 3-8 with a 5.53 ERA.

Zach has twice started season openers as a starting pitcher, in 2007 and again in 2010. His lifetime record in 1-0 in those assignments, with the Pirates winning both games.