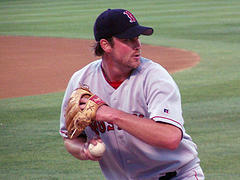 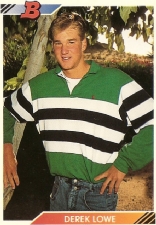 Derek Lowe was acquired along with Jason Varitek for Heathcliff Slocumb in possibly the best move made by then Boston Red Sox GM Dan Duquette, at the 1997 trading deadline and arguably the worst trade in Seattle Mariners history. He threw a no-hitter against the Tampa Bay Devil Rays on April 27, 2002 [1]. He earned a special place in the history of the Red Sox by pitching 7 scoreless innings in Game 4 of the 2004 World Series against the St. Louis Cardinals on October 27, 2004, thus clinching Boston's first world championship since 1918. He moved to the Los Angeles Dodgers as a free agent after that season.

On April 28, 2011, Lowe was arrested in Atlanta, GA and charged with driving under the influence and reckless driving. Making the incident worse, it was later revealed that Lowe had also been street racing with another car prior to the arrest, something which the pitcher vehemently denied. However, the charges were dismissed a month later for lack of solid evidence. Videos taken at the scene of his arrest indicated that Lowe had passed a field sobriety test. Charges of reckless driving were dropped as well, although he did not contest a charge of having made an improper lane change. On August 31st of that year, pitching for the Atlanta Braves, Lowe hit his first major league home run, off the Washington Nationals' John Lannan, in his 15th major league season; ironically, the homer came in the same game as the 450th by his teammate Chipper Jones, who was only one year older. Overall, it was a poor season, however, as Lowe led the major leagues with 17 losses, on his way to a record of 9-17, 5.05, and the Braves lost the National League wild card spot on the season's last day. On October 31st, Lowe was traded to the Cleveland Indians in return for minor league pitcher Chris Jones and cash, with the Braves picking up two-third of the $15 million remaining on his contract.

Lowe was reborn in Cleveland in the early stages of the 2012 season. On May 15th, he ran his record to 6-1 by throwing his first shutout in nearly seven years, beating the Minnesota Twins, 5 - 0. Throwing almost exclusively sinkers, he did not strike out a single batter in the game, becoming the first pitcher to record a shutout without the benefit of a strikeout since Scott Erickson on April 28, 2002. The revival was short-lived, however. On August 1st, the Indians announced that he had been designated for assignment. His record was now 8-10, 5.52 in 21 starts, he had lost four straight decisions, and his ERA in his last 3 starts was a stratospheric 15.88 - not much worse than the 8.80 ERA he had put up in his last 12 games. Rookie Corey Kluber was called up to take his place in the starting rotation. He cleared waivers and on August 13th officially signed with the New York Yankees, having agreed to pitch out of the bullpen for the Bronx Bombers. In his first appearance with his new team that same day, he pitched four shutout innings of relief, taking over for emergency starter David Phelps, and earned his first save since 2001 in preserving the Yankees' 8-2 win over the Texas Rangers. He did well for the Yankees, pitching 17 times with a 3.04 ERA in 23 2/3 innings, and adding three outings in the postseason. It took a while however for him to find a job in 2013, as the Texas Rangers only signed him on March 6th, with a minor league contract and a chance to make the team's bullpen as a long reliever, but make the team he did. His stay was short-lived, though, as he made only 9 appearances, giving up 13 runs in as many innings, before he was designated for assignment on May 20th to make room on the roster for Josh Lindblom. He rejected an assignment to the minor leagues and at the All-Star break announced that he had played his last game as a major leaguer.