Note: This page links to Bob McClure, the reliever for almost two decades in the majors and later pitching coach and scout. For the Negro League pitcher in the 1920s, click here. 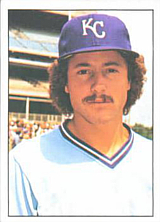 After ending his career with the Florida Marlins in 1993, pitcher Bob McClure was a member of the club's coaching staff in 1994. He started the year as the bullpen catcher, but was promoted to bullpen coach on May 17th. McClure later served as a Marlins scout in 1996.

McClure coached his son's Sequoia High School team (1995-1998), then joined the Colorado Rockies organization. He was the pitching coach for the Salem Avalanche from 1999 to 2001 and the Colorado Springs Sky Sox from 2002 to 2005. McClure joined the Kansas City Royals as their pitching coach in 2006, staying until 2011. In 2012, he was appointed pitching coach of the Boston Red Sox under new manager Bobby Valentine. The team would struggle under Valentine and was stuck in 4th place in the AL East 13.5 games back on August 20th when McClure was replaced by his assistant Randy Niemann as pitching coach. In 2014, he was appointed pitching coach of the Philadelphia Phillies, staying until the end of the 2017 season. He joined the Minnesota Twins in 2018 as a senior pitching advisor and returned in that role for 2019. In 2020, he served as the Twins bullpen coach, but when training camp was set to resume on July 1st after being interrupted in mid-March by the coronavirus pandemic, he was asked by the Twins to sit out the season alongside fellow coach Bill Evers over concerns about their history of health issues. He did not return in 2021, contrary to Evers.