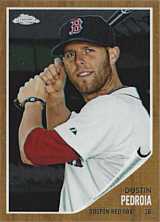 Dustin Pedroia was a second baseman who spent his entire major league career with the Boston Red Sox and who was the winner of the 2008 American League Most Valuable Player Award, among other honors.

Pedroia hit .347/.417/.432 as a college freshman in 2002. He was on Team USA that year, hitting just .208 before an injury in 2002 Haarlem Baseball Week, forcing the national team to move Eric Patterson to short from second. He improved to .440/.472/.579 the next year, leading the Pacific-10 Conference in runs (83), hits (120) and doubles (34) while finishing second in average to Jeff Van Houten. He was left off the All-Conference team, but was named a second-team All-American by Baseball America and Co-Player of the Year (with Ryan Garko). He was second in NCAA Division I in hits (one off of the lead), tied for 4th in runs with Stephen Drew and Sam Fuld and led in doubles, five more than anyone else. He hit .294 for team USA that summer and appeared in the Pan-American Games, in which the USA finished second to Cuba. In 2004, the 20-year-old hit .393/.502/.611 for ASU. He was second in the Pacific-10 Conference in average, trailing Jed Lowrie. He tied Kurt Suzuki for 6th in NCAA Division I in runs (78), made the All-Conference team and was a consensus All-American. Overall, he had hit .384/.466/.544 in college.

The Boston Red Sox took Pedroia with the 65th overall pick of the 2004 amateur draft and he was signed by scout Dan Madsen for a $575,000 bonus. As they had lost their first-round choice for compensation of the signing of Keith Foulke, he was their first player taken.

In his second full pro season, Pedroia batted .305/.384/.426 for Pawtucket, fielding .986 between shortstop, second base and third base. He tied Josh Fields for second in the IL in average, only three points behind leader Josh Phelps. He was the hardest batter in the league to strike out, only whiffing every 15.67 at-bats. Baseball America rated him the #18 prospect in the league. He made the IL All-Star team as a utility man.

Pedroia was the starting second baseman for Team USA in the first round of the 2009 World Baseball Classic. However, he injured his oblique muscle in batting practice before the second round and was replaced on the roster by Brian Roberts. That year, he was the cover boy for PlayStation's MLB: The Show video game.

On July 24, 2013, he signed an eight-year contract extension with the Red Sox, worth $110 million that could make him a member of the team until 2021. While he hit only 9 homers in 2013 - the fewest since his rookie season - he was still a key contributor to the Red Sox's third World Championship in 10 years. He hit .301 in 160 games, leading the American League in plate appearances, scoring 91 runs and driving in 84. While his home runs were down, he did hit 42 doubles. He went 15 for 63 (.238) in the postseason, scoring 89 runs and driving in 7. His fall in power was attributed to a thumb injury, on which he had surgery after the season, but he continued to find it difficult to hit homers in 2014. When he hit the 100th homer of his career on May 2nd, he became only the second player in team history with 100 homers and 100 stolen bases, the other being Carl Yastrzemski, but overall the season was a huge disappointment as the Red Sox quickly fell out of contention and traded away a number of players, giving up on the year. For his part, he hit only .278 in 135 games, his lowest batting average since his late-season call-up in 2006, with 33 doubles but only 7 homers. He was bothered with soreness in his left hand and wrist late in the year, prompting the Red Sox to end his season in early September.

2015 was a lost season for Dustin and the Red Sox, who finished last in the AL East. Various injuries limited him to 93 games, but he did pretty well when he was in the lineup, hitting .291 with 12 homers and 42 RBI, good for an OPS+ of 112 after falling to 99 the previous year. In 2016, both he and the team were revived. He was now one the few remaining veterans on a team built on great young players such as OFs Mookie Betts and Jackie Bradley and SS Xander Bogaerts. With DH David Ortiz stating he would retire at the end of the campaign, Boston got out of the gate strong, and was in the thick of the race for a division title all year. On August 27th, Dustin fell one hit short of tying a major league record when he recorded hits in 11 consecutive at-bats over three games. Three players - Johnny Kling, Pinky Higgins and Walt Dropo - shared the record with 12 straight hits. He finished the year at .318 in 154 games, with 15 homers and 74 RBI as Boston won a division title. In the Division Series, he went 2 for 12 with a double as Boston was swept by the Cleveland Indians. 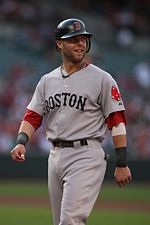 After a healthy and very productive 2016, Pedroia once again had some health issues in 2017, limiting him to 105 games. He hit .293 with 7 homers and 62 RBI, but again the end of the year was marred by a quick exit from the postseason. This time, the Red Sox lost to the Houston Astros in the Division Series, and Dustin went just 2 for 16, with both hits being singles. He missed the start of the 2018 season after undergoing offseason knee surgery and was activated on May 25th following a brief rehab assignment in the minors. Eduardo Nunez and Brock Holt had manned second base in his absence. After playing just three games, he went back on the DL on June 2nd, with inflammation in his left knee. He had gone just 1 for 11 in the three games and did not play again after that, missing the Sox's run to their 4th World Series title since breaking the "Curse of the Bambino" in 2004. He finally returned to action on April 9, 2019, starting the Sox's home opener at second base and going 1 for 4 against the Toronto Blue Jays. On April 17th, he had to leave a game against the Yankees in the 2nd inning because he was experiencing pain in his knee, and then stayed back in New York while the team was heading to Tampa Bay in order to undergo an examination. He was 2 for 20 at the time, and the team was struggling badly. On May 11th, he was supposed to start a rehabilitation assignment with the AA Portland Sea Dogs, but he was scratched at the last moment and his return was put on hold. He returned briefly with AAA Pawtucket a couple of weeks later, playing in 5 games, but again had to put his return on hold on May 24th. This time, it seriously looked as if Pedroia had reached the end of the road, as he returned home to Chandler, AZ for some extended rest. He underwent another surgery on his left knee on August 6th.

Indeed he did not return in 2019 nor in the shortened 2020 season. On February 1, 2021, he officially threw in the towel and announced his retirement as a player.