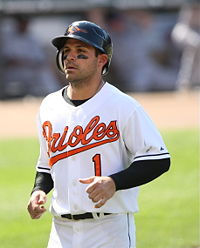 After being listed in the Mitchell Report, Brian Roberts admitted to using steroids once in 2003. His father Mike Roberts was a college coach.

Roberts was just 2 for 12 with two walks for Team USA in the 1997 Intercontinental Cup, backing up Brian Oliver at second base and Adam Everett at shortstop. He was not originally on Team USA's roster for the 2009 World Baseball Classic, but was added after Dustin Pedroia injured his oblique muscle in batting practice after the first round. In his first start at second base against the Netherlands, he hit a single, a double and a triple and drew a walk in a 9-3 win to eliminate the Classic's Cinderella team.

Roberts played only 59 games in 2010, after being out from April 10th to July 23rd due to an abdominal strain, beginning a run of injury-filled years. He hit .278/.354/.391 during his time on the field. On September 27th, he struck out against the Tampa Bay Rays' Joaquin Benoit, and on his way back to the plate thwacked himself on the helmet with his bat in frustration; unknowingly, he had given himself a concussion and missed the last six games of the season with headaches. In 2011, he began the season as the starting second baseman but played his last game on May 16th, bothered by post-concussion symptoms. He hit only .221 in 39 games, with a .273 OBP, at which point Robert Andino took over as the O's second baseman.

Roberts was back with the team for spring training in 2012, but was unable to take part in any exhibition games and began the year on the disabled list once again. On May 23rd, he was finally assigned to the AA Bowie BaySox to begin a rehabilitation assignment. However, he urged fans to show patience with his condition: "Standing here today, I can't say that I'm going to be Brian Roberts tomorrow. I'm not going to go out there and probably be running into walls tomorrow. But I am going to be out there, and it's going to be a progression." He did make it back to Baltimore on June 12th, but, alas, his stay was again brief. After 17 games of hitting .182, he went on the disabled list July 3rd with a torn labrum in his right hip. He had just begun another rehabilitation assignment in Class A, with the Aberdeen IronBirds, when the O's announced on July 29th that he required surgery, putting an end to another frustrating season.

Brian was back in good health in spring training in 2013, claiming his old job as the starter at second base for the Orioles on Opening Day, but suffered yet another injury in the third game of the season on April 4th, straining his right hamstring on a stolen base attempt. He was immediately placed on the disabled list. That injury turned out to be nastier than anticipated, as in early May, he was transferred to the 60-day DL when it became clear that surgery would be required to repair the damage, with late June as the earliest target date penciled for his return to action. Indeed, he was re-activated on June 30th; the Orioles had managed to stay in contention in his absence, even though the production of his back-ups, Ryan Flaherty and Alexi Casilla, had been well below par. In the end, Roberts managed to play 77 games as the team's busiest second baseman, hitting .249 with 8 homers and 39 RBI. He became a free agent after the season, and the Orioles decided to part ways with him after 1327 games. On December 17th, he signed a one-year deal with the New York Yankees, who had just seen their own long-time fixture at second, Robinson Cano, leave via free agency. The contract was only finalized on January 14th, though, as the Yankees waited for a spot to open on their roster, which happened when Alex Rodriguez was handed his one-year suspension for PED use on January 11th.

He played 91 games for the Yankees in 2014 and was the regular during the first four months of the season. It was the most games for Brian since suffering his concussion at the end of the 2009 season. He hit only .237, however, with 5 homers and 21 RBIs, but did score 40 runs and collect 16 doubles. Not satisfied with his production, the Yankees acquired Stephen Drew from the Boston Red Sox at the trading deadline to play the position and released Roberts a few days later, but Drew produced even less than him. Roberts announced his retirement after the season, hanging up his spikes after 14 seasons of hitting .276. He became eligible for the Hall of Fame in its 2020 election but did not receive a single vote and was dropped from the ballot.