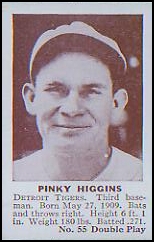 After his baseball career ended, Higgins served two months in a Louisiana prison for negligent homicide. While driving under the influence of alcohol, he killed a highway worker, and he was later sentenced to four years in jail. Higgins died of a heart attack at age 59, days after being paroled.