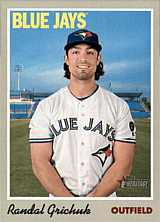 Outfielder Randal Grichuk was selected by the Los Angeles Angels of Anaheim in the first round of the 2009 amateur draft with the 24th overall pick. He was signed by scout Kevin Ham and made his pro debut that summer with the AZL Angels, hitting .322 with 7 homers in 53 games, an excellent start to a professional career for a 17-year-old.

Given his young age, the Angels did not rush him through his system, putting him back in the Arizona League to start 2010, where he hit .327 in 10 games. He then moved up to the Midwest League, where he hit .292 with 19 doubles and 7 homers in 52 games for the Cedar Rapids Kernels. In 2011, an injury cost him a good chunk of the season, as he played only 14 games in the California League, where he should have been all year, the rest of his time being back with the AZL Angels and Cedar Rapids on rehabilitation assignments. Altogether, he played 53 games, hitting only .256 in what was a lost year. He bounced back in 2012 with a full season for the Inland Empire 66ers of the California League, putting up a .298 average, with 30 doubles, 9 triples and 18 homers, with 79 runs scored and 71 RBI in an excellent all-around season. In 2013, he was promoted to AA and the Arkansas Travelers of the Midwest League. Still only 21, he fell back to .256/.306/.474 in 128 games, but his power was still very good, with 27 doubles, 8 triples and 22 homers. He also scored 85 runs.

On November 22, 2013, he was traded to the St. Louis Cardinals along with OF Peter Bourjos in return for 3B David Freese and P Fernando Salas. He was assigned to the Memphis Redbirds to start the 2014 season and hit .310 in 21 games before getting the call to St. Louis in late April. He made his debut on April 28th against the Milwaukee Brewers, taking over in right field in the 9th inning as part of a double switch. Greg Garcia also made his debut for the Cards in the same game, as a pinch-hitter. The game went into extra innings and Randal went to bat twice, being out on an infield fly against Brandon Kintzler in the bottom of the 9th and striking out against Zach Duke in the 11th before the Brewers won the game, 5-3, in 12 innings; he also played an inning in center field during the game as the Cards made numerous substitutions.

On January 19, 2018, he was traded to the Toronto Blue Jays in return for Ps Conner Greene and Dominic Leone. Grichuk started the season slowly and at the end of April was hitting just .106 with a pair of homers and 7 RBI in 25 games - and that was after going 2 for 3 with a pair of ribbies in his final game of the month. He was then out for a month with an injury, only returning on June 1st. He began to hit a bit better, but was still just at .206 at the All-Star break. He had a solid month of August, when he hit .306 with 5 homers and 13 RBI and reached the 20-homer mark for the third straight year in the early days of September. On September 9th, he suffered a freak injury when he ran into a security guard who was posted in foul territory along the first base line at the Rogers Centre. Both he and Justin Smoak were converging at full speed towards the spot where the ball was to land and the security guard moved out of Smoak's way, carrying his steel stool, but did not see Grichuk coming and accidentally stepped into his path, with the bench colliding with his head. Grichuk was knocked out cold and had to be removed from the game to be checked for a possible concussion. He escaped serious injury and was able to be in the starting lineup for the Jays' next game two days later. He finished the season at .245 with 25 homers and 61 RBI in 124 games.

On April 2, 2019, he signed a five-year contract extension with the Blue Jays, a clear sign that he was one of the players around whom the team wanted to build. He celebrated this the next day by hitting a pair of homers to lead the Blue Jays over the Baltimore Orioles, 5-3. On May 28th, he was in the middle of an embarrassing play as he lost a routine fly ball by Avisail Garcia of the Tampa Bay Rays in the devilish roof of Tropicana Field and saw it fall behind him and then bounce towards the right field corner. Garcia rounded the bases easily and received credit for an inside-the-park homer. In Grichuk's defense, he was far from the only player to have been defeated by the awkward playing conditions in Tampa Bay's much decried home venue. Of all qualified batters in 2019, he posted the lowest OBP (.280), but did contribute 31 homers and 80 RBI for a .457 slugging, finishing with a 96 OPS+.

In 2020, he switched positions with Teoscar Hernandez, moving to center while the lanky slugger switched over to right field. He started the year slowly, not hitting a single extra-base hit in his first 11 games, although he was getting on base at a .342 OBP clip, a marked improvement over the previous year. When he turned on the power, it came on with a vengeance, as he hit 6 homers in 6 games, in addition to a pair of doubles. This corresponded to the Jays making a move up the standings and into postseason contention during the strange abbreviated season. By that point, he was hitting .344 with an OPS of 1.056. He fell back to earth somewhat, but continued to contribute. On August 28th, he hit a dramatic walk-off homer at the Jays' temporary home of Sahlen Field in Buffalo, NY. The Baltimore Orioles had taken a 4-3 lead in the top of the 10th by scoring their designated runner, and the Jays had been unable to move Reese McGuire any further while their first two batters made outs against Cole Sulser. But Randal ended the game in dramatic fashion by driving a ball just beyond the reach of CF Cedric Mullins, who vainly climbed the fence but was unable to reel in the two-run homer.

Grichuk played for the Richmond, TX team in the 2003 Little League World Series.