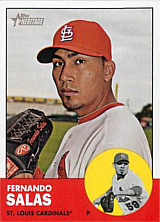 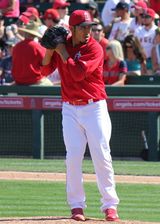 Fernando Salas was the 112th major leaguer born in Mexico, 111 players after the other major leaguer from his hometown, Mel Almada.

The St. Louis Cardinals purchased his contract from Saltillo in February 2007. He spent that year primarily with the Palm Beach Cardinals, going 2-3 with a 5.26 ERA; he returned briefly to Saltillo, allowing 2 runs in 2 2/3 innings. That winter, he was 1-1 with three saves and a 2.95 ERA for the Venados de Mazatlán. Fernando made major strides in 2008. He was 7-3 with 25 saves and a 3.65 ERA for the Springfield Cardinals. He led the Texas League in both saves and appearances (tied with Gabe DeHoyos. He had 12.16 strikeouts per 9 innings to lead the league's pitchers. He was named the TL All-Star reliever. Baseball America rated him the league's #18 prospect, between Kevin Jepsen and Casey Weathers. Despite pitching solely in relief, he led Springfield with 100 strikeouts while walking only 16 in 74 innings. In the 2008 Futures Game, he pitched the 7th inning for the World team. Relieving Jesus Delgado, Salas got Nate Schierholtz on a grounder, Matt LaPorta swinging and Dexter Fowler on a ground out. In the 8th, he was replaced by Henry Rodriguez.

Salas suffered thumb and shoulder injuries in 2009, sidelining him for about two months. He was 1-0 with a 3.18 ERA in 10 games for Springfield, tossed a shutout inning on a rehab stint with the GCL Cardinals and went 3-2 with a 3.67 ERA in 24 outings for the Memphis Redbirds, allowing a .220 average. He began 2010 with Memphis and started 1-0 with seven saves and a 3.38 ERA, striking out 19 and walking four in 18 2/3 innings. He was then promoted to the major leagues. In his MLB debut, he came in to open the bottom of the 9th inning with a 7-1 lead against the Cubs, replacing Jason Motte (who had left for a pinch-hitter). Salas retired his first opponent, Geovany Soto, on a grounder. Fellow rookie Starlin Castro reached on a Felipe López error. Xavier Nady lined out and Kosuke Fukudome flew out to end the game. Salas did not get into another game in that stint with St. Louis, being sent down the next day when Adam Ottavino was called up. He ended the season in the majors without a decision and with a 3.52 ERA in 27 games.

In 2011, Fernando led the Cardinals in saves with 24, and went 5-6 with a 2.28 ERA in 68 games, striking out 75 batters in as many innings,. When the Cardinals made it to the postseason with a late-season surge, manager Tony LaRussa did not use him as a closer but as the first in the string of relievers he would use to close up games. The strategy worked and Salas got into 11 games in the three rounds of the postseason. He was hit a bit in the World Series, surrendering 7 hits and 3 walks in 3 2/3 innings, but overall was a solid contributor to the Cards' unexpected World Series title.

Salas fell back on the Cardinals' depth ladder over the next two seasons. In 2012, he pitched 65 games, but only had a 1-4 record, no saves and a 4.30 ERA. He pitched 5 times in the postseason, again with no record and a 3.18 ERA. He was with the Mexican national team in the 2013 World Baseball Classic. In Mexico's first game, he relieved Oscar Villarreal with a 5-4 lead in the 8th against Italy. He fanned Mike Costanzo and retired Mario Chiarini and Drew Butera for a hold, but Sergio Romo blew it in the 9th. In his other outing, a 5-2 loss to Team USA, he again replaced Villarreal in the 8th. Ryan Braun doubled off Karim Garcia's glove, but Salas struck out Joe Mauer and retired David Wright. Eric Hosmer singled in Braun then Giancarlo Stanton flew out following a balk. Romo again finished it.

In 2013, he pitched only 27 times in three major league stints with a record of 0-3, 4.50. When not in St. Louis, he was in 22 games for Memphis, where he was 1-2 with a 1.90 ERA and 12 saves. He was not retained by the Cards for their postseason roster and on November 22nd was traded to the Los Angeles Angels of Anaheim along with 3B David Freese in return for OFs Peter Bourjos and Randal Grichuk.

On August 31, 2016, he was traded by the Angels to the New York Mets for minor leaguer Erik Manoah. He began the life of a journeyman from there, bouncing back to the Angels in 2017 with stints in Arizona in 2018 and Philadelphia in 2019.