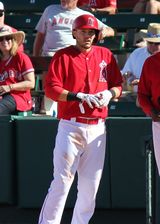 He started the 2019 season with the Indians, starting at shortstop in place of an injured Francisco Lindor. While his fielding was strong, he had a rough welcome at the plate, getting just 1 hit in his first 22 at-bats.