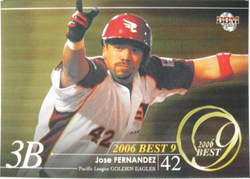 Slugger Jose Fernandez hit 127 homers in the minor leagues, 45 in South Korea and 159 in six years in Japan through 2008 for 331 career pro homers. He failed to homer in 49 AB in the majors.

Montréal let Fernandez go as a free agent and he signed with the Milwaukee Brewers. He hit .286/.357/.403 for their 2000 Indianapolis Indians farm team and fielded .955 at third base. He smacked 37 doubles and only struck out 93 times, showing significant strides in walks as well. He led Expos minor leaguers in doubles that year.

Jose was signed by the Anaheim Angels for 2001 and he continued to improve. He fielded .953 at third and hit .338/.421/.624 for the Salt Lake Stingers. He scored 99 runs and drove in 114 runs in 122 games, hit 37 doubles and 30 home runs. He was named Anaheim's Minor League Player of the Year and led the system in average, runs, hits (153), total bases (282), home runs and RBI. He led the Pacific Coast League in average, assists by a third baseman (234), RBI and OBP and made the PCL All-Star team at third. He went 0 for 1 in the AAA All-Star Game. Anaheim gave him 27 plate appearances but he hit just .080/.148/.120 in that tiny sample size for the 2001 Angels. Never having gotten an extended look in the majors, his big league career was over despite his improving play and stardom in the minors.

Anaheim waived Fernandez and he was picked up by the Chicago Cubs but did not last long in their system and was let go.

Jose signed with the SK Wyverns for 2002 and had a fine year, hitting .281 with 45 HR and 107 RBBI. He was two homers behind league leader Seung-Yeop Lee and hit the most home runs of any foreign player in the Korea Baseball Organization that year.

Fernandez then moved on to the Chiba Lotte Marines. He hit .303/.376/.571 with 32 HR and 100 RBI for the team in 2003. He was 6th in the Pacific League in homers, tied for fourth in strikeouts (106, even with Alex Cabrera), tied Michihiro Ogasawara for 7th in RBI and was 8th in slugging. Ogasawara beat him out for the Best Nine at third. Even though he was one of Chiba Lotte's top hitters, they let him go.

Seibu and Fernandez had a contract dispute and Jose signed on instead with the Rakuten Golden Eagles, in desperate need of offensive help. He hit .302/.370/.541 as the star and cleanup hitter for the second-year franchise, with 33 doubles, 28 HR and 88 RBI. He tied Hichori Morimoto for third in the PL in hits (148), tied Kazuhiro Wada for 7th in runs (72), was second in total bases (265), 4th in homers (four behind leader Ogasawara), 5th in RBI, tied for fifth in sacrifice flies (6), fifth in walks (53), 6th in OBP and third in slugging behind only Ogasawara and Cabrera. He did ground into a PL-leading 18 double plays. He became the first Rakuten player ever to be honored on the Best Nine, making it at third base.

Fernandez moved to the Orix Buffaloes for the 2009 season, joining a slew of gaijin who were past their primes but had productive careers in Japan with LaRocca, Cabrera and Tuffy Rhodes as teammates.

His final professional games came in 2013, with the Acereros de Monclova in the Mexican League and the Orix Buffaloes in Japan.