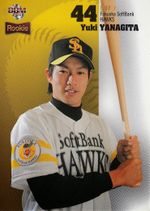 Yuki Yanagita has been a star outfielder in Nippon Pro Baseball.

Yanagita won four Hiroshima Big Six University League batting titles, once taking the MVP; he peaked at .528 in the spring of 2009. He was also timed at 92 mph as a pitcher. The Softbank Hawks took him in the second round of the 2010 draft after taking Ayatsugu Yamashita in the first round. Motoyasu Wakai was the scout.

He made his NPB debut as a pinch-runner for Alex Cabrera. He did not get his first at-bat until over a month later, when he batted for Takehito Kanazawa in an interleague game and grounded out against Kazuki Yoshimi. He was 0 for 5 with 3 strikeouts and a run as a rookie in 2011. With the Criollos de Caguas in the Puerto Rican Winter League, he hit .271/.329/.443, similar numbers to the starting left fielder, Edgard Clemente.

Yanagita became the starting center fielder for the Hawks in 2014, Hasegawa moving to right field and RF Akira Nakamura moving to first base. He hit .317/.413/.452 with 15 home runs, 33 stolen bases (only caught six times) and 91 runs. The lone negative was six errors, leading Pacific League outfielders. He made his first PL All-Star team. In 2014 NPB All-Star Game 1, he replaced Hasegawa in left field and drew a walk from Shoichi Ino his first time up. He batted again in the 8th and grounded out against Tetsuya Yamaguchi in a 7-0 loss to the Central League. He started game 2 in center and leading off and put on a show. He led off the game with a single off Shintaro Fujinami, stole second and came home on a Yoshio Itoi single. In the second, he singled off Fujinami again. He flew out against Tomoyuki Sugano in the 4th but then took Daisuke Yamai deep to open the 6th. He singled off Yamai to open the 7th and scored his third run of the day. He finally flew out against Kam Mickolio in the 9th, having gone 4-for-6 in a 12-6 win. He was named game MVP. He was the 17th player in NPB All-Star Game history to have a four-hit game and the second Hawks player to do so, following Hiromitsu Kadota by 38 years. For the season, he finished among the PL leaders in numerous departments: average (third, after Itoi and Ginji Akaminai), OBP (2nd, .011 behind Itoi), slugging (10th, between Dae-ho Lee and Kazuo Matsui), runs (1st, one ahead of Haruki Nishikawa), hits (166, tied for 3rd with Itoi), RBI (70, tied for 10th with Akaminai), steals (2nd, 10 behind Nishikawa), walks (72, 5th), strikeouts (131, 4th, between Nishikawa and Nakamura) and hit-by-pitch (16, 2nd, one behind Takahiro Okada). He joined Itoi and Sho Nakata as the Best Nine outfield picks in the PL and joined Itoi and Dai-Kang Yoh as the Gold Glove winners in the outfield. He finished second in voting for the 2014 Pacific League MVP, leading all position players and trailing only Chihiro Kaneko. In the 2014 Japan Series, he went 8 for 20 with two doubles, five runs and a RBI as Softbank beat the Hanshin Tigers in five games, proving to be an excellent sparkplug. He led the event in hits (one over Seiichi Uchikawa), runs (two over Hiroki Uemoto and Kenji Akashi) and average (.050 over Uchikawa). Uchikawa beat him out for Series MVP honors but he was named one of the Series' three Outstanding Players (Shota Takeda and Dennis Sarfate) were the others, a sort-of MVP runner-up. He was 7 for 21 with 2 runs and six RBI in the 2014 Nichi-Bei Series as Samurai Japan beat the MLB All-Stars, 3 games to 2. His four-RBI game in game 2 was the first four-RBI performance by Japan vs. MLB since Hideki Matsui in 1996. Yanagita was named series MVP. He was the first Japanese MVP in a Nichi-Bei Series, an award that had been won by Barry Larkin, Barry Bonds, Ken Griffey Jr. and seven other MLB stars previously.

Yanagita took his game to an even higher level in 2015, becoming the 10th 30-30 player in NPB annals and the first batting champion to go 30-30. In the 2015 NPB All-Star Game 1, he replaced Katsuya Kakunaka in the lineup and took over right field, with RF Ikuhiro Kiyota moving to LF. In his lone at-bat, he grounded out against Yasuaki Yamasaki in the 9th inning of a 8-6 loss. In Game 2, in his hometown of Hiroshima, he hit third and started in center but failed to repeat 2014's game 2 heroics. He struck out against Hiroki Kuroda, grounded out facing Kenta Maeda, grounded out against Kenjiro Tanaka and singled off Tony Barnette before being erased in a double play in a 8-3 loss. For the regular season, he put up outstanding numbers: .363/.469/.631, 34 HR, 32 SB (8 CS), 88 BB, 110 R, 99 RBI. He won two monthly MVP awards, led the Pacific League in average (.004 over Shogo Akiyama), OBP (.050 over Akiyama), slugging (.072 ahead of Takeya Nakamura), OPS (160 ahead of Akiyama), runs (two more than Akiyama), walks (16 more than Takumi Kuriyama and Itoi) and total bases (317, 3 ahead of Akiyama). He was second in hits (182, 34 shy of Akiyama), tied Ernesto Mejia for 6th in doubles (31), tied Brandon Laird for third in home runs (3 behind Takeya Nakamura), was third in RBI (after Takeya Nakamura and Nakata), ranked second in steals (two behind Takuya Nakashima) and was second in hit-by-pitch (16, two behind Wily Mo Pena). He hit only .143/.333/.214 in the 2015 Japan Series, but his team got plenty of production from Lee, Akashi and a strong pitching staff to give them another title. He won another Gold Glove and another Best Nine nod (Akiyama and Kiyota were the other outfielders). He was an easy pick for the 2015 Pacific League Most Valuable Player Award, winning 211 of 230 first-plate votes. His 1,098 vote points were well ahead of Akiyama's 368. Like Tetsuto Yamada in the CL, he went from 2nd-place in the 2014 MVP voting to first in 2015. He was on the Japanese national team roster for the 2015 Premier 12 but was a late cut due to a left knee injury he had sustained in late September; teammate Kenta Imamiya took his roster spot.

The Hiroshima native started 2016 NPB All-Star Game 1 in right field, hitting 3rd. He was retired by Sugano and Fujinami before Takero Okajima replaced him. In Game 2, he replaced Itoi in right. He struck out in the 6th against Ino and singled in the 8th against Shinji Tajima. He finished the 2016 season at .306/.446/.523 with 31 doubles, 100 walks, 82 runs and 73 RBI. He was 5th in the PL in average (between Itoi and Uchikawa), 1st in OBP (.029 ahead of Kakunaka), 1st in slugging (.013 ahead of Hideto Asamura; Shohei Otani would have led had he qualified), 1st in OPS obviously, 2nd in 16 runs (16 behind Akiyama), 3rd in doubles (behind Akiyama and Asamura), tied for 7th in triples (4), tied for 4th in steals (with Yuichi Honda and Nakashima at 23; only caught twice) and first in walks (one ahead of Akira Nakamura). He was a surprisingly distant 12th in voting for the 2016 Pacific League Most Valuable Player Award.

He started in center, hitting cleanup, in 2017 NPB All-Star Game 1. He grounded out against Raúl Valdés and fanned against Kazuto Taguchi before Nishikawa replaced him. In Game 2, he fanned against Sugano and Takumi Akiyama and flew out against Ino. Seiji Uebayashi took over his batting spot then, while Shogo Akiyama moved from RF to CF. While his All-Star play was again disappointing, his regular season was stellar: .310/.426/.589, 95 R, 31 HR, 99 RBI, 89 BB in 2017. He made leaderh0ards in average (2nd, .012 behind Shogo Akiyama), OBP (1st, .028 ahead of Shogo Akiyama), slugging (1st, .053 ahead of Shogo Akiyama), OPS (1st obviously), runs (2nd, 11 behind Shogo Akiyama), hits (139, tied Imamiya for 8th), doubles (30, tied Akaminai for 3rd), homers (tied Zelous Wheeler and Okada for 3rd), RBI (tied Asamura for 2nd, 4 behind Alfredo Despaigne), steals (14, 8th, between Imamiya and Uebayashi), walks (1st, 6 ahead of Okada) and total bases (264, 3rd, after Shogo Akiyama and Wheeler). He won the Gold Glove (joining Shogo Akiyama and Nishikawa) and Best Nine (joining the same two) after a year off and finished second to teammate Dennis Sarfate in voting for the 2017 Pacific League MVP. He scored the first run of the 2017 Japan Series, singling off the Yokohama BayStars' Ino and scoring on a hit by Despaigne. He finished the Series at .320/.393/.320 with six runs in seven games as the Hawks won the title. He scored the most runs in the Series, one ahead of José López.

The Softbank superstar was back in the PL lineup for 2018 NPB All-Star Game 1. He struck out against Daisuke Matsuzaka and grounded out versus Randy Messenger before Akira Nakamura took over. In Game 2, he led off and played the whole game in center, going 1 for 5, with a 8th-inning single off Yasuaki Yamasaki to score Ryoichi Adachi. He hit .352/.431/.661 with 36 homers, 95 runs, 102 RBI, 21 steals (in 28 tries) and 62 walks in 2018. He led the PL in average (.029 ahead of Shogo Akiyama and Kensuke Kondo), OBP (.004 ahead of Kondo), slugging (.071 ahead of Hotaka Yamakawa) and OPS (107 ahead of Yamakawa). He was also 4th in runs (between Asamura and Sosuke Genda), 3rd in hits (behind Shogo Akiyama and Asamura), tied Kondo for 6th in doubles (29), tied Akaminai and Yudai Fujioka for 7th in triples (5), 2nd in homers (11 behind Yamakawa), 4th in RBI (between Nakata and Seiya Inoue), tied Kazuki Tanaka for 7th in swipes and 3rd with 314 total bases (behind Shogo Akiyama and Yamakawa). He won another Gold Glove (alongside Nishikawa and Shogo Akiyama) and Best Nine (with Shogo Akiyama and Masataka Yoshida and was 4th in voting for the 2018 Pacific League Most Valuable Player Award (after Yamakawa, Asamura and Shogo Akiyama). He hit .238/.429/.407 with six runs in six games as the Hawks won the 2018 Japan Series against the Hiroshima Carp. He homered off Shota Nakazaki in the bottom of the 10th to win Game 5. He led the Series in runs for the second straight year, two ahead of Yurisbel Gracial. He had more heroics in the 2018 Nichi-Bei Series. In the opener, down 6-5 in the bottom of the 9th, he hit a two-out game-winning homer off Kirby Yates. The next game, he took Erasmo Ramirez deep. He finished the Series at .318 with a 991 OPS as the NPB All-Stars beat the MLB All-Stars. He tied Rhys Hoskins, J.T. Realmuto and Juan Soto for the Series lead in homers.