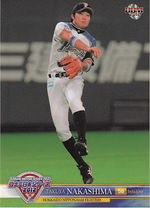 Takuya Nakashima has been an All-Star in Nippon Pro Baseball.

Nakashima was picked by the Nippon Ham Fighters in the 5th round of the 2008 NPB draft. He made his debut with the big club in 2011 as a defensive replacement for Kensuke Tanaka and struck out in his first at-bat, against Takashi Kamoshida. He did not bat again that year and scored two runs as a pinch-runner. In 2012, he got his first hit, off Kazuhisa Makita, and hit a miniscule .114/.127/.114 in 82 plate appearances over 105 games. He was mostly a defensive sub for SS Makoto Kaneko. He was 0 for 1 with a run in four games in the 2012 Japan Series.

At age 24, he moved to short when Tanaka returned from the US. He batted .264/.350/.287, scored 69 runs, drew 66 walks and pilfered 34 bags in 41 attempts. He was 7th in the loop in runs, led in steals (two ahead of MVP Yuki Yanagita, succeeding Nishikawa as the steal leader, Nishikawa having since moved to the outfield so as not to compete at 2B), was second with 34 sacrifice hits (one behind Kenta Imamiya), led in assists at SS (450) and tied Akira Nakamura for 7th in walks. He made the PL All-Star team. In 2015 NPB All-Star Game 1, he pinch-hit for catcher Motohiro Shima in the 7th and struck out against Hayato Takagi. Replacing Imamiya at short, he came up again in the 9th and whiffed versus Yasuaki Yamasaki. He started Game 2 and singled off Hiroki Kuroda and grounded out against Kenta Maeda. Imamiya replaced him at short. He was picked for the Best Nine as the top shortstop in the PL that year. He made the Japanese national team for the 2015 Premier 12, backing up Tetsuto Yamada at 2B and Hayato Sakamoto at SS as a defensive sub. He got only one at-bat in five games, retired by Jesús Martínez.