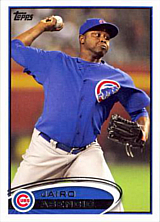 Jairo Asencio led the International League in saves under two different names. Going by Luis Valdez, he led the circuit in 2009 with 27 saves for the Gwinnett Braves. He was later revealed to actually be named Jairo Asencio. In the same league in 2011, his 26 saves for Gwinnett paced the circuit. He then starred in the 2012 Caribbean Series, allowing no hits, walks or runs in three innings while saving three games for the Leones del Escogido. He helped Escogido win the Series and took home the Caribbean Series MVP. The only relief pitcher to win the award before Asencio was Francisco Butto.