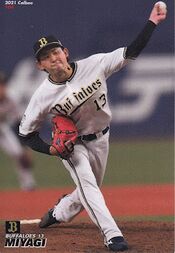 Hiroya Miyagi was a Rookie of the Year in Japan.

In 2021, he made it to the big club for almost the entire year and did very well with a 13-4, 2.51 campaign. He finished second in the Pacific League in ERA, 1.12 behind teammate Yoshinobu Yamamoto. He was also second to Yamamoto in wins (five back), and tied Takayuki Kishi for 9th in Ks (134). With that 1-2 punch atop the rotation, Orix went worst-to-first. In the 2021 Japan Series, he shut out the Yakult Swallows for the first 7 innings of Game 2 but Keiji Takahashi battled him evenly. In the 8th, he walked Naomichi Nishiura and allowed two-out singles to Yasutaka Shiomi and Nori Aoki to make it 1-0; Ryo Yoshida relieved and Yakult wrapped up the shutout, Miyagi having taken a tough loss. They fell in six games, and he did not appear again (he presumably was in line for Game 7 had Orix made it there). [3] He finished 4th in voting for the 2021 Pacific League Most Valuable Player Award behind teammates Yamamoto, Yutaro Sugimoto and Masataka Yoshida. [4] He won the 2021 PL Rookie of the Year handily, getting 255 votes; Hiromi Itoh was next with 21. [5] Interestingly, the 2020 CL Rookie of the Year, Masato Morishita, was also born August 25!