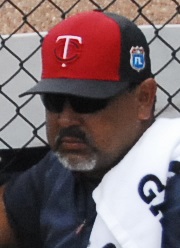 Eddie Guardado saved 187 games over 17 seasons in the majors. At one point one of baseball's top relievers, he led the American League in saves in 2002 and twice pitched in the All-Star Game.

Guardado was selected by the Minnesota Twins in the 21st round of the 1990 amateur draft and was signed by scout Kevin Murphy. He made his pro debut the following year with the Elizabethton Twins, going 8-4 with a 1.86 ERA in 14 games. He reached the majors in June 1993 and went 3-8 with a 6.18 ERA in 19 games that season. By 1995, he had been converted to a reliever, and he would be a mainstay in the Twins bullpen for nearly a decade.

Guardado replaced LaTroy Hawkins as the Twins closer late in the 2001 season. He recorded 26 saves in the first half of the 2002 campaign, struck out both batters he faced in the 2002 All-Star Game, and led the AL with 45 saves. The following year, he was again an All-Star while notching 41 saves.

Following the 2003 season, Guardado became a free agent and signed with the Seattle Mariners. In two and a half years with Seattle, he saved 59 games. He finished his career with stints with the Cincinnati Reds, Texas Rangers, and back with the Twins.

In 2015, he returned to the Minnesota Twins, the team with which he had found his greatest success as a player, as the bullpen coach under new manager Paul Molitor, a former teammate. He stayed until the end of Molitor's tenure at the concluson of the 2018 season.