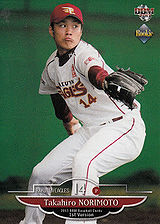 Takahiro Norimoto won a Rookie of the Year Award in Nippon Pro Baseball.

Norimoto went 33-0 in college and won a MVP. He was a second-round pick of the Rakuten Golden Eagles in the 2012 draft, following Yudai Mori in round one. He became the 13th rookie to start on Opening Day in Pacific League annals, thanks to ace Masahiro Tanaka being tired from the 2013 World Baseball Classic. He allowed four earned runs in 6 1/3 IP in a loss to Tadashi Settsu and the SoftBank Hawks. He was very good overall as a rookie in 2013 at 15-8, 3.34 with 134 K, 142 H and 51 BB in 170 IP as the #2 Rakuten starter after Tanaka. He tied Chihiro Kaneko and Settsu for second in the PL in wins (9 behind Tanaka), was 7th in ERA (between Mitsuo Yoshikawa and Ken Togame) and 6th in whiffs (between Yuki Nishi and Yoshikawa). He then became the third rookie to start Game 1 of a Japan Series, following two guys from the 1950s: Nobuo Oshima (1950) and Taketoshi Ogami (1952). He did very well, fanning 10 and allowing only four hits and two runs in eight innings against the Yomiuri Giants, but lost to Tetsuya Utsumi, who flung a shutout. The only runs came when Hisayoshi Chono singled in Yoshiyuki Kamei in the 5th and on a Shuichi Murata 8th-inning homer. He surprisingly relieved in game 5, replacing Wataru Karashima. He allowed another Murata homer in the 7th; in the 9th, Yoshinobu Takahashi doubled and Murata singled him in. In the top of the 10th, Norimoto drew a leadoff walk from Kentaro Nishimura, scoring later on a hit by Ginji Akaminai for the win. Norimoto became the 14th rookie to record a win in a Japan Series. In Game 7, he joined with starter Manabu Mima and Tanaka, tossing two shutout innings (2 H) to help Rakuten win its first Japan Series. Mima was named Series MVP. He easily won the 2013 Pacific League Rookie of the Year Award, with 223 of 233 votes, 219 more than runner-ups Shohei Otani and Tatsuya Sato. He also was 4th in voting for the 2013 Pacific League Most Valuable Player Award behind Tanaka, Yuya Hasegawa and Casey McGehee.

He did not suffer a sophomore slump, going 14-10 with a 3.02 ERA and 204 K to 39 BB in 202 2/3 IP in 2014. He was 4th in the PL in ERA (between Otani and Nishi), second in wins (two shy of Kaneko), led in complete games (9, 4 ahead of Kishi), led with 7 shutouts (as many as #2 Kishi and #3 Kaneko combined), led in IP (11 1/3 more than Kaneko) and led in Ks (5 more than Kaneko, denying him a pitching Triple Crown). Then, in the 2014 Nichi-Bei Series, he threw a perfect game against the MLB All-Stars for five innings, sending down Robinson Cano, Yasiel Puig, Evan Longoria and Justin Morneau twice each. Nishi relieved and blew the perfecto but Nishi, Kazuhisa Makita and Yuji Nishino combined to finish off a historic no-hitter, the first a NPB All-Star team no-hit a MLB All-Star squad.