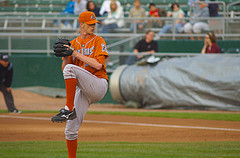 Pitcher Brandon Dickson made his big league debut with the St. Louis Cardinals in 2011.

Dickson was 5-2 with four saves and a 3.39 ERA as a junior at Tusculum College. After being signed as an undrafted free agent by scout Scott Nichols for the St. Louis Cardinals organization, he made his pro debut with the Johnson City Cardinals in 2006, appearing in 9 games and earning his first pro win against the Pulaski Blue Jays on August 10th. He finished the season 1-0 but with 11 runs in 11 1/3 innings pitched; he did fan 15, though.

With the Swing of the Quad Cities the following summer, he recorded his first professional save on April 10th against the Cedar Rapids Kernels and went on to post an 11-7 mark with a 3.50 ERA in 31 outings. He finished 10h in the Midwest League in ERA. He tied several hurlers for fifth in the MWL in victories.

He began 2008 with the Palm Beach Cardinals and was 7-8 with a 3.51 ERA and one save in 23 games before being promoted to the AA Springfield Cardinals in August for six late-season starts, where he struggled to a 3-2, 6.75 record and a WHIP around 2.00. He spent the 2009 campaign back with Springfield, going 8-10 with a 3.78 ERA in 28 appearances. He tied for fourth in the Texas League in defeats but was also third in ERA among hurlers with 140+ innings.

In 2010, Dickson had a 11-8, 3.23 record for the Memphis Redbirds. He tied for fifth in the 2010 Pacific Coast League in wins, trailing Eric Hacker, Michael Kirkman, Lance Lynn and Clayton Mortensen. His 137 strikeouts were second, four behind Lynn.

He started 2011 back with Memphis and was not as effective as in 2010 (4-7, 3.86, 20 BB in 100 1/3 IP) but got called up when Ryan Franklin was released. In his major league debut on July 2nd, he relieved Trever Miller with a 5-1 deficit, two on and none out. He retired Ben Zobrist on a fly ball, then got Evan Longoria to hit into an inning-ending 5-4-3 double play. In the 8th, he retired Matt Joyce and B.J. Upton before being relieved by Raúl Valdés. Dickson ultimately appeared in 4 total games in 2011, compiling a 3.24 ERA.

Dickson remained with Memphis for most of the 2012 season, posting a 3.63 ERA over 23 starts. He also appeared in four more Major League games in 2012, but was roughed up this go around, allowing 7 runs (5 earned) on 10 hits and 2 walks in just 6 1/3 innings of work. Those struggles cost him his roster spot, as he was released that November.

Following his release, Dickson joined the Orix Buffaloes of Nippon Professional Baseball in 2013, the team he'd remain with through the 2019 season. Through his first six seasons in Japan, Brandon was one of Orix's best starters, posting a 2.77 ERA in his first season abroad and going from there. In 2019, however, Orix chose a different role for Dickson, sending him to the bullpen. He ultimately spent half of the year as the Buffaloes' closer, tying Hirotoshi Masui for the team lead in saves with 18.

Following the 2019 season, Dickson was selected to Team USA's roster for the 2019 WBSC Premier12 Tournament, notably being the only player in the NPB selected to the squad. Ultimately Dickson's selection proved pivotal for the US staff, which mostly lacked strong relief pitching. Dickson made five relief appearances with a 3.60 ERA over the entire tournament while being just one of two players to record multiple saves (the other being Yasuaki Yamasaki). For his strong work Dickson was named the best reliever in the tournament.

He made his return to Major League Baseball in 2021, back with the Cardinals in early September nine years after his last appearance for them. He just pitched twice in relief, allowing 3 runs in 2 innings for an ERA of 13.50, but it was still remarkable to return after so many years. He also pitched 12 times with the AAA Memphis Redbirds, going 1-0, 8.74 after having been signed in mid-June, but was released before the end of the month as he had failed to get batters out at either level.