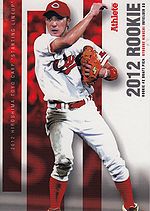 A Triple Crown winner in college, he was taken by the Hiroshima Carp in the second round of the 2011 draft, one round after Yusuke Nomura. He made his NPB debut June 30, 2012, pinch-hitting for Bryan Bullington against Shugo Fujii. His first hit was a triple off Shogo Yamamoto July 1 and his first homer was August 21 against Daisuke Miura. He took over for veteran Akihiro Higashide as the starter at 2B and hit .229/.254/.294 in 63 games, fielding .970 at 2B. His 25 sacrifice hits were 4th in the Central League, between Daisuke Fujimura and Kensuke Uchimura.

Kikuchi produced at a .247/.297/.347 clip in 2013, with 27 doubles, 16 steals in 23 tries, 69 runs and 121 strikeouts. He fielded .980 at 2B. He led CL second basemen in putouts (351), double plays (115), errors (18) and broke Masahiro Araki's record for assists (528). He also broke the Hiroshima franchise record for sacrifice hits with 50, one more than Higashide had in 2001. He was 10th in the CL in runs (between Yohei Oshima and Hayato Sakamoto), tied Eishin Soyogi for 5th in doubles, was 7th in steals (between Tsuyoshi Ueda and Takashi Toritani), tied Toritani for 6th in times caught stealing, was second to Matt Clark in whiffs and led in sacrifice hits (by 15 over Yamato Maeda). He easily won the Gold Glove and he also finished second in voting for the Best Nine nod at 2B in the CL, with 102 votes to former big leaguer Tsuyoshi Nishioka's 155. 2013 started a streak of five Gold Gloves in a row for Kikuchi, who would start a streak of five NPB All-Star nods the following year. During this streak Kikuchi also received Best Nine honors at second base in 2017 and was named the MVP of the 2018 Climax Series.

On December 2, 2019, he was posted by his team, Hiroshima, with the hope of attracting offers from teams in Major League Baseball. However, after a month of availability, Kikuchi ultimately chose to stay in the NPB, resigning with Hiroshima for four years at ¥300 million ($2.7 million).

Beyond his NPB experience, Kikuchi also has an extensive international resume. Kikuchi participated in both of the first two runnings of the new-look MLB Japan All-Star Series, helping Samurai Japan to wins in both. He was also a bronze medalist with Japan in the 2017 World Baseball Classic. Perhaps Kikuchi's best event, however, was the 2019 WBSC Premier12 Tournament, where he was named the best second baseman and the outstanding defensive player.