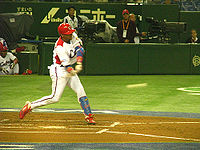 Yulieski Gurriel, often called simply Yuli, is the son of long-time Cuban star Lourdes Gourriel Sr., who has managed Yulieski in the Cuban Serie Nacional. His brothers are Yuniesky Gourriel and Lourdes Gourriel Jr. and his uncle is Luis Enrique Gourriel,all of them former or current teammates on Sancti Spiritus. He is also the great-nephew of José R. Delgado and cousin of Yoannys Delgado. While his father spelled his last named "Gourriel", Yulieski stated in 2014 that he preferred the spelling "Gurriel".

Gourriel hit .278/.364/.444 as Cuba's #3 hitter and third baseman in the 2007 Pan-American Games. He hit one of the three homers for the Gold Medal winners. He batted .275/.341/.525 in the 2007 Baseball World Cup as Cuba failed to win Gold for the first time in decades. Gourriel cracked 3 homers for the Silver Medalists, tying Mike Saunders, Justin Ruggiano, Andy LaRoche and Chia-Hsien Hsieh for the tournament lead in circuit clouts.

Gourriel produced at a .229/.341/.286 clip in the 2008 Olympics as Cuba won Silver. He fielded .980 at second base, after moving to make room for Enriquez at third. Gourriel only drove in one run in 9 games. In the 9th inning of the Gold Medal game, he came up with a 3-2 deficit, the bases loaded and one out against Tae-hyun Chong. Gourriel promptly hit into a game-ending double play. Gourriel rotated between second base and third base in the 2009 World Baseball Classic, when Cuba failed to make the finals in a global baseball event for the first time in 58 years. He hit .333/.333/.625 with 2 homers, 5 runs and 6 RBI in a solid six games. He tied Yoennis Céspedes and Frederich Cepeda for the team lead in runs and was second to Cepeda in RBI.

In 2014, Gurriel was given a rare permission to play abroad by Cuban authorities and joined the Yokohama DeNA BayStars. He hit a solid .305 with 22 doubles and 11 homers in 62 games for Yokohama but after only one season in Japan, he returned to Cuba claiming he was injured and needed to recuperate in his homeland. He then played for Industriales de La Habana of the Serie Nacional in 2014-15 and 2015-16.

After playing in the 2016 Caribbean Series in the Dominican Republic with Ciego de Ávila as one of the team's "national reinforcements", Gurriel reportedly left the team alongside younger brother and teammate Lourdes Jr. in an attempt to defect and find employment in Major League Baseball. Yulieski's defection meant that the experiment to allow certain players to join a foreign league - but not MLB - while still in their prime was not preventing these players from seeking their ultimate goal. After defecting, he moved to an undisclosed location in order to establish residency and request to be declared a free agent by MLB. This happened on June 13th, allowing him to sign with any interested team. The signing came on July 16th, and it was with the Houston Astros who gave him a five-year deal. He was expected to be playing in the majors for the Astros before the end of the season. Indeed, after 15 minor league games at four different levels, he was called up to Houston to make his debut on August 21st. Starting as the designated hitter against the Baltimore Orioles, he singled off Yovani Gallardo in his first at-bat and went 1 for 2 with a walk before being replaced by pinch-hitter Tony Kemp in the 8th. Houston won the game, 5-3. Manager A.J. Hinch explained after the game that he had been pulled from the game because of a tight hamstring, but the issue was not considered serious. On September 25th, he tied a major league record by grounding into 4 double plays in a game. He hit .262 in 36 games.

Yuli was a key part of one of the best teams in the majors in 2017 as he was the starting first baseman for the Astros and part of a fearsome line-up that dominated opponents. On July 21st, he had a career game against the Baltimore Orioles, collecting four hits including a homer in an 8-7 win over the Baltimore Orioles. He had a chance to hit for the cycle in the 9th, but popped out to the outfield and ended up missing the triple. Still, he broke Aaron Judge's streak of being named the American League Rookie of the Month for three consecutive months by winning the honor in July. He hit .304 with 5 homers and 20 RBIs during the month. He finished the year at .299 with 43 doubles, 18 homers and 75 RBIs. In the postseason, he was particularly devastating in the Division Series against the Boston Red Sox, when he went 9 for 17 (.529) with a double and a triple. He then added 6 hits, three of them doubles, in the Astros' win over the New York Yankees in the ALCS and another 6 hits, inclusing 3 doubles and 2 homers in the World Series win over the Los Angeles Dodgers. His World Series were marred by an unfortunate incident in Game 3, when after homering off Yu Darvish, he was caught on camera in the dugout making a gesture mocking Darvish's Asian heritage. He was fined an undisclosed amount, ordered to undergo sensitivity training and suspended for the first five games of the 2018 season as a result.

Aside from the suspension, the start of Gurriel's 2018 season was further delayed by a wrist problem which surfaced early in spring training. He had to undergo surgery on February 28th to remove the hook of the hamate bone in his left hand. He had a pre-existing fracture, and the safest course of action was the operation, which was expected to sideline him until mid-April. Following the injury and suspension, he played his first game on April 13th, then the next day hit a three-run homer off Mike Minor and added a double in a 6-5 loss to the Texas Rangers, picking up where he had left off the previous season. On September 21st, he had a two-homer game in an 11-3 win over the Los Angeles Angels which clinched a postseason slot for the Astros. The homers were a 1st-inning grand slam and a two-run shot in the 3rd; he added another RBI to give him 7 on the day. On the same day, his younger sibling, rookie Lourdes Jr. also had a two-homer game for his team, the Toronto Blue Jays, making the two the first pair of brothers ever to have multiple-homer games on the same day. He finished the year at .291 in 136 games, with 13 homers and 85 RBIs. On the downside, he led the AL with 22 double play grounders. In the postseason, he was a combined 7 for 31 with 1 homer and 3 RBIs as Houston bowed out at the ALCS stage.

Gurriel won the AL Player of the Month Award for the first time in July of 2019 when he hit .398 with 12 homers and 31 RBIs for the Astros. He had only hit 8 homers through the end of June before his power explosion. He then made an early case to repeat wining the honor in August when on August 7th, he drove in 8 runs in a 14-3 win over the Colorado Rockies, tying a team record set by J.R. Towles in 2007; this came on the back of a two-homer game against the same team the day before. Combined with his 7-RBI game a year earlier, it made him the second Astro after Hall of Famer Jeff Bagwell to have two games of 7 or more RBIs. He finished the year at .298 in 144 games, with 40 doubles, 31 homers, 85 runs and 104 RBIs. He hit .316 in the Division Series against the Tampa Bay Rays, but was just 3 for 24 against the New York Yankees in the ALCS. In the World Series against the Washington Nationals, he hit .310 with a homer and 5 RBIs, but Houston lost in 7 games.