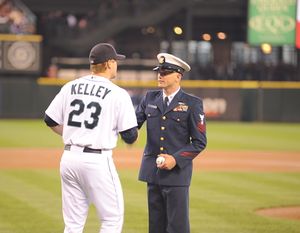 Kelley shakes the hand of a Coast Guardsman in 2010

Pitcher Shawn Kelley was drafted by the Seattle Mariners in the 13th round of the 2007 amateur draft. He was signed by scout Alvin Rittman and made his pro debut that summer.

Kelley made his major league debut with the Mariners in 2009.

He was traded to the New York Yankees in return for minor league outfielder Abraham Almonte on February 13, 2013. He pitched 57 times for the Yankees that season, going 4-2 with a 4.39 ERA. He struck out 71 batters in 53 1/3 innings, a very positive sign for a short reliever. When the great Mariano Rivera retired after the season, it set off a chain of events that found Kelley as the Yankees' 8th-inning set-up man at the start of 2014, with David Robertson, who had been Rivera's understudy for a number of years, taking over as closer. However, Robertson suffered a pulled groin muscle barely a week into the season, and Kelley suddenly found himself as a closer for the first time of his career. He recorded his first career save on April 7th, preserving a 4-2 win over the Baltimore Orioles. Things did not go as smoothly in his next opportunity, though, as he gave up four straight singles to the Orioles in the 9th inning, turning a 4-3 lead into a 5-4 loss. He made 59 appearances in all that season, ending up with a record of 3-6, 4.53 and 4 saves.

On December 29, 2014, he was traded to the San Diego Padres for Johnny Barbato. he had a solid season for the Padres in 2015, going 2-2, 2.45 in 53 outings. He became a free agent after the season and signed with the Washington Nationals. He had a good first season for them in 2016 as he appeared in 76 games and went 3-2, 2.64. During the periods when the team struggled to find a reliable closer, he was given the opportunity to close a few games and picked up 7 saves even if this was not really his normal role. He pitched in the postseason for the first time making a couple of scoreless appearances in the Nats' loss to the Los Angeles Dodgers in the NLDS. However, 2017 was a rough year as injuries limited him to 33 outings, and he wasn't particularly effective when he did take the mound, posting an ERA of 7.27 in 26 innings. He did save 4 games, as once again Washington had trouble finding a reliable closer, but he clearly was not the long-term solution. He was not used in the postseason. He was bouncing back nicely in 2018, until a bizarre incident upset his career. He had a 2.59 ERA over his first 34 appearances, doing a solid job as a middle reliever even if the team was not performing up to expectations, then on July 31st, he was asked to close out a game against the New York Mets with the Nats holding an insurmountable 25-1 lead in the top of the 9th. He of course did not blow that huge advantage, but did give up 3 runs and unexpectedly slammed his glove in anger on the mound after allowing a two-run homer to Austin Jackson. Nationals manager David Martinez said that he found the gesture to be "disrespectful to the organization" and GM Mike Rizzo backed up his rookie skipper, deciding the next day to part ways with Kelley stating that "he was in the way" as the Nats tried to climb out of their hole. He was designated for assignment and on August 5th, he was sent to the Oakland Athletics in return for some international bonus money, which meant that he was joining a team with a much better record at that point of the season. He pitched very well for Oakland, going 1-0, 2.16 in 19 games. He also pitched a scoreless inning in Oakland's loss to the New York Yankees in the Wild Card Game.