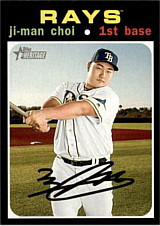 Ji-Man Choi was signed by Seattle Mariners scouts Jamey Storvick and Pat Kelly in 2009. He had a splendid pro debut with the AZL Mariners in 2010, hitting .378/.459/.541 with 15 doubles in 39 games and .302/.380/.442 in 11 contests for the High Desert Mavericks. He won Arizona League MVP honors, All-Star honors at catcher as well as the batting title and was also second in OBP (.009 behind Nick Shaw), second in slugging (.058 behind Henry Moreno), first in OPS (.006 ahead of Moreno) and tied for 4th in doubles. Baseball America picked named him the league's 18th best prospect, between Chevez Clarke and Teodoro Martinez. Choi's progress was hampered by a back injury that sidelined him for all of 2011. He missed much of 2012 with injuries as well but did well when healthy, hitting .298/.420/.463 with 43 runs scored and 43 RBI in 66 games for the Clinton Lumber Kings. He began 2013 very well with the High Desert Mavericks (.337/.427/.619, 24 doubles, 40 RBI in 48 games) to earn a promotion to AA. When Jorge Alfaro was yanked from the 2013 Futures Game due to injury, Choi replaced him on the World roster. He got into the game in the 6th, taking Canadian Jordan Lennerton's spot at first base. He flew out against Jimmy Nelson to open the 7th, then came up again in the 9th with two on, one out and a 3-0 deficit but struck out against A.J. Cole.

Choi was suspended for 50 games for violating baseball's drug policy in 2014. Between the suspension and a broken fibula suffered in a Cactus League game in March 2015, he was limited to only 97 games over the 2014 and 2015 season, at a time when he should have been making a serious push to claim a major league spot. He hit .282 in 74 games the first year, and .290 in 23 games the second. Most of his playing time those two years was with the AAA Tacoma Rainiers. A natural left-handed hitter, Choi decided to start switch-hitting during the '15 season. The results were actually quite promising, as he went 6 for 14 against lefties after making the change. He became a minor league free agent and signed a minor league deal in November with the Baltimore Orioles with an invitation to spring training. However, this minor league deal left him exposed to the 2015 Rule V Draft and he was selected by the Los Angeles Angels of Anaheim in the December 10 draft. Choi gave up switch hitting during spring training in 2016, and made the Opening Day roster for the Angels, making his debut on April 5th. He played 54 games in the majors, playing behind Albert Pujols and C.J. Cron, hitting only .170 with 5 homers and 12 RBI while splitting his time between first base and left field. He did much better in AAA, putting up a .346 average in 53 games for the Salt Lake Bees.

Before the 2017 season, Choi signed with the New York Yankees as a free agent, although he was far down the depth chart at first base and DH, as the Yankees had veterans Chris Carter and Matt Holliday, not to mention youngsters Greg Bird and Tyler Austin, already on hand. He started the year in AAA with the Scranton/Wilkes-Barre RailRiders where he did quite well, hitting .289 with 8 homers and 43 RBI in 56 games. With Bird and Austin both injured and Carter not producing, Ji-Man was called up to New York on July 5, homering and driving in 2 runs in each of his first two games. Those were his only 2 hits before the All-Star break, but on July 10th, the Yankees decided to release Carter, who was hitting .201 with a ton of strikeouts. It seemed like Choi was going to start at first base until one of the two youngsters was ready to come back, or they acquired someone else in a trade. Acquire someone they did, minor league slugger Garrett Cooper, who filled in the gap until a trading deadline deal brought in Todd Frazier to play third base, freeing Chase Headley to play first. The fallout for Ji-man was that he spent the rest of the season in AAA, finishing at .288 in 87 games, with 25 doubles, 15 homers and 69 RBI. He became a free agent after the season and signed with the Milwaukee Brewers

He began 2018 with the Brew Crew, but after hitting a pinch double in his only at-bat on March 29th, he was sent down to the minors. With the Colorado Springs SkySox, he continued to demonstrate he had mastered AAA, hitting .302 with 9 doubles and 5 homers in his first 40 games. He was called back to Milwaukee and hit a home run in his first game back on May 18th. He was mostly used as the Brewers' DH in a string of road interleague games over the next few weeks, and his average gradually fell to .179 as he started June 1-for-13. He delivered pinch hits in back-to-back games on June 8-9 against the Philadelphia Phillies, the second of these being his first career grand slam. It came off Luis Garcia in the 6th inning and put Milwaukee ahead to stay in a game they eventually won, 12-3. The very next day, he was traded to the Tampa Bay Rays for infielder Brad Miller, who had just been designated for assignment. He played regularly and hit well for Tampa, contributing to the Rays' unlikely second-half surge. On September 10th, he hit a walk-off homer against Brad Hand of the Cleveland Indians, turning a 5-4 deficit into a 6-5 win as he connected with two out and a man on in the 9th inning. Overall, he finished the year hitting .263 with 10 home runs in 61 games.

Choi established himself as a guy who go could regularly in 2019, batting .261 with 19 home runs and 63 RBI in 127 games. Though he hit but .200 in the ALDS loss to the Houston Astros, he did draw 7 walks and belt a home run as the Rays fell in 5. He endeared himself to Rays fans with his constant grin and perpetual positive attitude. In 2020, he decided to try switch-hitting, and in the first game he faced a lefty, on July 26th, he took Anthony Kay of the Toronto Blue Jays deep for a home to deepest center field at Tropicana Field. Later in the ballgame, he drew a bases-loaded walk against another southpaw, Brian Moran, as the Rays scored twice to tie the game with a two-run two-out rally.