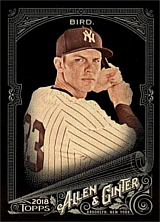 First baseman Greg Bird began his professional career in 2011. He has struggled mightily with injuries at the big league level.

Greg was invited to spring training with the Yankees in 2015 and hit .357/.438/.786 through his first 14 at-bats. He was assigned to Trenton to start the year and hit .258 in 59 games, but with 16 doubles and 9 homers. He was promoted to the AAA Scranton/Wilkes-Barre RailRiders in early July and played 34 games there, hitting .301, before being called up to the Big Apple. He made his debut on August 13th, starting at first base in place of Mark Teixeira and hitting seventh. Facing the Cleveland Indians, he went 0 for 5 with a pair of strikeouts, but the Yankees snapped a five-game losing streak with an 8-6 win. It was not necessarily an easy situation for Bird, with the Yankees in the middle of a tough race for first place in the AL East with the Toronto Blue Jays but he managed to prove his mettle quickly. He got his first big league hit against the Jays on August 15th, then had an excellent three-game series against the Minnesota Twins, contributing to a Yankees sweep by going 5 for 9. In the final game of the set on August 19th, he hit his first two major league homers in a 4-3 win. Both long balls came off Ervin Santana and he drove in all four Yankees runs, as Carlos Beltran was on base ahead of him both times. Teammates were starting to whisper "Wally Pipp" at Teixeira, out with a bruise caused by fouling a ball off his leg, a reminder of the man who had once given his starting spot to Lou Gehrig and never managed to get it back. Teixeira's bruise turned out to be a fracture, giving Bird a chance to start at first base the rest of the season. His 10th home run on September 22nd was an important one, as the three-run shot off Mark Lowe of the Blue Jays in the 10th inning was key to a 6-4 Yankees win that brought them back to 2 1/2 games off first place. He finished the season with a .261 average in 46 games, with 9 doubles, 11 homers and 31 RBI. He started the Wild Card Game at first base against the Houston Astros and got one of his team's three hits off Dallas Keuchel, a 2nd-inning single, in a losing effort.

Bird suffered a major setback before the 2016 season, as he aggravated a pre-existing shoulder injury in offseason drills. He underwent surgery on February 2nd and missed the entire season. If there were any concerns the injury would slow him down in 2017, he dispelled them with a tremendous spring training during which he hit .450 with a bunch of homers. With Teixeira having retired, Bird was the Opening Day first baseman but started the year slowly as he was bothered by a bruised right foot and flu-like symptoms. He broke out of an 0-for-20 slump with his first homer of the year, a two-run shot off Adam Wainwright of the St. Louis Cardinals, in the 2nd inning of a 9-3 win on April 16th. He finished that game 3-for-3 with a walk, also slugging a double. He continued to struggle at the plate for the rest of the month and, on May 2nd, the Yankees placed him on the disabled list with a bruised right ankle. He was hitting .100 with the one homer in 60 at-bats. He suffered a setback working himself back into playing shape at AAA Scranton/Wilkes-Barre in early June, necessitating more time off; he was batting only .143 in the minors at the time. On July 17th, the Yankees announced that he would undergo surgery on his ankle to remove excessive bone growth. With a recovery time set at six weeks, there was a small chance that he could come back in September, although it was unlikely the Yankees would want to rush him back to the field. He made it back on August 26th, with the Yankees in a tough race for a postseason slot. In his first game back, he reached base three times with a hit and a pair of walks in a 6-3 win over the Seattle Mariners. Greg finished the year batting .190 in 48 games, with 9 homers and 28 RBI, playing his best ball the last couple of weeks of the season. He was healthy during the postseason and started all 13 of the Yankees' games at first base, hitting well. He went 1 for 3 in the Wild Card Game, 4 for 18 (.222) with 2 homers in the Yankees' win over the Cleveland Indians in the Division Series and 5 for 20 (.250) with another homer in their loss to the Houston Astros in the ALCS.

Following his solid last few weeks in 2017, Bird was slated to start at first base in 2018, but he was once again victim of the injury bug. Just before the regular season was to start, on March 29th he was placed on the disabled list with a bone spur in his ankle requiring surgery. He was expected to miss six to eight weeks while Tyler Austin took over for him. He returned on May 26th, following a rehab assignment, and hit his first long ball of the season in his third game back on May 28th, a solo shot off Justin Verlander of the Houston Astros. He spent the remainder of the season on the roster, but his production was disappointing, as he hit .199 with 11 homers and 38 RBI in 82 games. The Yankees acquired career minor leaguer Luke Voit from the St. Louis Cardinals at the trading deadline, and while it was initially as an insurance policy, the newcomer hit so well when given a chance to play that he displaced Bird, who finished the year riding pine and did not play at all in the postseason. The two were competing for the first base job in spring training in 2019, with little chance the team would have the roster flexibility to keep both players. It seemed that, once again, an injury would intervene, as Bird was hit by a pitch on the elbow on March 20th and sat out a few days. Both players had been having a very good spring until then, but the injury turned out to be less serious than feared, and with Aaron Hicks slated to start the year on the DL, the two were able to be on the roster, with one playing first base and the other DH'ing. In a now familiar pattern, Bird started the year slowly, with only 1 homer and a .171 average in his first 10 games, then went on the injured list on April 16th with a foot injury. He never returned as Voit and Mike Ford took over his playing time. After the season, on November 20th, he was designated for assignment to clear space on the 40-man roster, as his unceasing injuries had exhausted the team's patience. On November 27th, he rejected an outright assignment to AAA, making him a free agent.

Bird was with a couple of different organizations in 2020, but did not appear in a single game as he failed to make a major league roster, and there was no minor league baseball being played due to the Coronavirus pandemic. He first signed with the Texas Rangers on February 4th but was released on April 14th, then a month after that he reached a deal with the Philadelphia Phillies but never played for them either. Then, just as spring training was getting underway in 2021, he reached a minor league deal with the Colorado Rockies. He spent the year in AAA with the Albuquerque Isotopes, where he hit .267/.362/.532 in 112 games with 27 homers and 91 RBIs. That showed that he could still be a productive hitter when healthy and the following spring, it was the turn of the Toronto Blue Jays to give him a look. He played well in spring training and seemed to have gained a spot on the opening day roster as he filled an important niche on the team as a lefthanded batter with power, but on April 4, 2022, only a couple of days before the season started, he was granted his release when the Blue Jays trimmed their roster to 28 players as required, and he wasn't on it. But then his original team, the Yankees sprang a surprise and picked him up and signed him to a minor league contract. Contrary to the Jays, he did not fill any obvious need with the Bronx Bombers, so he was assigned back to AAA Scranton/Wilkes-Barre to start the year.