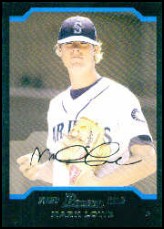 Mark Lowe was drafted by the Seattle Mariners in the 5th round of the 2004 amateur draft. He was signed by scout Mark Lummus and made his pro debut that summer.

Mark pitched in the major leagues for Seattle from 2006 to 2010, exclusively as a relief pitcher. His best year was 2009, when he appeared in 75 games with a 3.26 ERA, and saved 3 games, although his record was only 2-7. He was traded to the Texas Rangers on July 9, 2010, accompanying Cliff Lee to Texas while the Mariners received four players in return. He only made 3 appearances for the Rangers in the regular season, giving up 4 runs in 3 innings, but was on their roster for the 2010 World Series and appeared in a couple of games against the San Francisco Giants, when he gave up 5 runs in two-thirds of an inning. 2011 was a bit better, as he made 52 appearances out of the bullpen for the Rangers, with a record of 2-3, 3.80 and 1 save. He was not one of the front line members of the bullpen and again did not play in the postseason until the World Series. But there, he was forced into action in Game 6 against the St. Louis Cardinals on October 27th, the most memorable game in Rangers history. Having given up one run in his only inning of work in the postseason, a mop-up appearance in a 16-7 loss in Game 3, he came on in the 11th inning as his team's 8th pitcher of the evening, and after his teammates had twice blown two-run leads which would have made them World Champions. With the score tied 9-all, the first batter he faced was David Freese, who hit a walk-off homer on a full count and he was charged with the loss; the Cards then went on to win Game 7 as well, leaving the Rangers pondering what might have been.

Lowe pitched another season for the Rangers in 2012, being again confined to a low-impact role out of the bullpen. In 36 appearances, he was 0-2, 3.43 and was not used in the postseason. He signed as a free agent with the Los Angeles Dodgers after the season but was released in spring training and caught on with the crosstown Los Angeles Angels of Anaheim at the start of the 2013 season. A 9.26 ERA in 11 games led to his release in early June. He signed with the Washington Nationals but spent the remainder of the year in the minors. More moves followed in 2014, an off-season signing with the Tampa Bay Rays being followed with a release in spring training for the second straight year. The Cleveland Indians then gave him a shot, and he pitched mainly in the minors but did make it to the big leagues for 7 games.

He hooked up with his original team, the Mariners, for 2015 and then pitched extremely well in the first four months of the year, with an ERA of 1.00 in 34 games covering 36 innings, during which he struck out 47. He was used strictly as a middle reliever, his only decision being a loss, and there was talk of making him the closer given the struggles of Fernando Rodney, but instead, the Mariners decided to cash in his new-found value by shipping him to the Toronto Blue Jays at the trading deadline on July 31st. In return, they received three prospects, Jake Brentz, Rob Rasmussen and Nick Wells, a nice return for someone they had picked off the scrap heap a few months earlier. Mark's first outing for the Blue Jays on August 1st was one to forget, however, as facing the Kansas City Royals, he relieved Mark Buehrle to start the 8th inning with a 5-4 lead but quickly blew the lead when he gave up a one-out solo homer to Ben Zobrist, then was tagged with three consecutive hits that led to two more runs and his being tagged with the loss. He made 23 appearances for the Blue Jays, going 1-2, 3.79 to finish the year at 1-3, 1.96 in 57 games, with 61 K's in 55 innings. He made 6 appearances in the postseason, giving up 2 runs in 4 1/3 innings of relief work. On December 8th, he parlayed his good season into a nice contract, inking a two-year deal with the Detroit Tigers worth $11 million.

Things did not go well at all in Mark's first season with the Tigers in 2016, as in 54 appearances, he went 1-3 with a 7.11 ERA. He did strike out 49 in 49 1/3 innings, but allowed 57 hits and a whopping 12 homers. After a lackluster performance in spring training in 2017, the Tigers released him on March 26th, swallowing the second year of his contract.