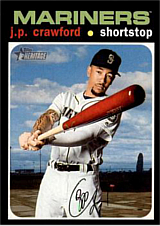 Shortstop J.P. Crawford reached the majors in 2017 with Philadelphia, moving to Seattle prior to the 2019 season. He is the cousin of All-Star outfielder Carl Crawford.

J.P. was taken 16th overall in the 2013 amateur draft by the Phillies and scout Demerius Pittman. He signed for a bonus of just under $2.3 million and debuted with the GCL Phillies on June 27th, going 1-for-4 against the GCL Pirates. He hit .345 in 39 games to earn a promotion to the Lakewood Blue Claws of the South Atlantic League, where he hit .208 in 14 games. Overall, his batting line was .308/.405/.400 with 35 runs scored and 21 RBI in 53 games. In 2014, he was assigned back to Lakewood to start the year and hit .295 in 60 games. The Phillies continued to promote him aggressively, moving him up to the Florida State League at midseason. Playing for the Clearwater Threshers, he hit .275. At only 19, he was almost four years younger than the average player in the FSL, making his ability to keep up that much more impressive. Overall, his batting line was .285/.375/.406 in 123 games, with 69 runs scored, 48 RBI and 24 stolen bases. The fact that Crawford was developing nicely allowed the Phillies to make the decision to trade long-time shortstop Jimmy Rollins after the 2014 season. While he was not in line to succeed him immediately, the Phillies were penciling him for a late 2016 or early 2017 arrival at Citizens Bank Park.

It took slightly longer than planned, but J.P. made his debut on September 5, 2017. He hit .214/.356/.300 in 23 games during his first taste. In 2018, he was the Phils' starting shortstop the first month of the season, but hit just .188 in his first 21 games, then went on the disabled list with a forearm strain. Another rookie, Scott Kingery, took over in his absence, and J.P. never really regained his starting job, playing a stretch of games in June and returning for September. That third and final stint was his best, as he managed to raise his average from .191 to .214, but it was still well below what the Phillies expected. Seeking to contend sooner rather than later after having been in the postseason race most of 2018, the Phils traded for veteran shortstop Jean Segura, plus relievers Juan Nicasio and James Pazos from the Seattle Mariners, who were going through a fire sale, with J.P. heading the other way along with first baseman Carlos Santana. Coming up in May, he hit .226/.313/.371 in 93 games.