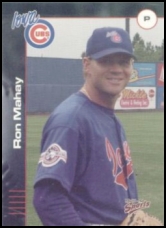 Ron Mahay appeared briefly with the Boston Red Sox in 1995 as a center fielder. When he returned to the team in 1997 it was as a relief pitcher making him one of the rare players in baseball history to legitimately play as a pitcher and position player (Babe Ruth, Brooks Kieschnick and Johnny Lindell are others). Since then he has been a journeyman relief pitcher and has very rarely had a chance to bat in a game. He was the last of the 1995 strike replacement players to play in the majors.