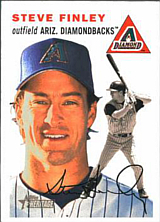 Steve Finley is one of only two players in major league history to hit at least 300 homers, 425 doubles, and 100 triples, and steal at least 300 bases. The other is Willie Mays.

In the 4th inning of his major league debut, Opening Day 1989, Finley separated his shoulder by crashing into the right field fence at Memorial Stadium. Repeatedly throughout the summer, his teammates cited that event as the inspiration that turned the Baltimore Orioles, a team who lost 107 games in 1988, into the 1989 team, which was not eliminated until the next-to-last day of the season.

He was traded in January 1991 by the Orioles along with pitchers Curt Schilling and Pete Harnisch to the Houston Astros for first baseman Glenn Davis. It would turn out to be one of the most one-sided trades in the history of baseball, as Davis was out of baseball within a couple of seasons, but all three players he was traded for had long and successful careers. A fractured wrist cost Finley six weeks of play in 1993, but he played at least 100 games every year from 1990 to 2006, except for the strike-shortened 1994 season, when he played 94 games for Houston.

A forgettable 1998 season for the San Diego Padres was forgotten by the time Steve matched that year's home run total by June of 1999 with the Arizona Diamondbacks. In one hot streak, Steve posted three four-hit games in four days.

In 2000, he was one of only four National Leaguers to hit at least 35 home runs and steal at least 12 bases. In 2001 Steve was given the opportunity to pitch for the first time in his career. Despite walking one batter and hitting another with a pitch, Steve was able to get out of the inning scoreless, maintaining his career 0.00 ERA. He hit his 100th career triple on May 4, 2003 in the 8th inning against the Atlanta Braves.

He became eligible for election to the Hall of Fame in 2013 but received only four votes and was dropped from the ballot. He coached for the Brazilian national team in the 2017 World Baseball Classic Qualifiers.