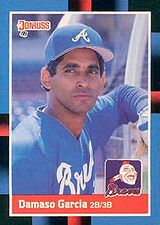 In 1984, Damaso Garcia hit safely in the Toronto Blue Jays' first 8 games. He hit .405 with 8 RBI during that time. He had a two-home run game, plus the game-winning RBI, on July 3rd that year. He was the Blue Jays' starter at second base from 1980 to 1986 after being acquired from the New York Yankees in the trade for Rick Cerone following the 1979 season. He was a leading candidate for the 1980 American League Rookie of the Year Award, losing out to the Cleveland Indians' Joe Charboneau. In his prime, he was among the best second basemen in baseball, combining speed with an ability to hit for a high average. He was an All-Star in 1984 and 1985. A career .283 hitter, he did not draw many walks however, so his OBP was a mediocre .309.

After being traded to the Atlanta Braves, he missed the entire 1987 season with a knee injury. He came back for 21 games in 1988, but hit only .117 and was released. The Montreal Expos signed him for 1989 and got good production for a year, when he hit .271 in 80 games while sharing duties with Tom Foley at second base. However, the knee injury had really hampered his speed and defense, and after failing to make the New York Yankees in 1990, he retired.

The two most similar players through 2013, according to the similarity scores method, are Fernando Vina and Joey Cora.

Shortly after he retired from baseball, Garcia was diagnosed with a brain tumor after he complained of double vision. He was given a very poor prognosis of recovery, but the operation, and subsequent chemotherapy, were able to cure him, although he was left with a large scar and permanent sequels, such as hampered speech. While recovering, he began working with children who had suffered from traumatic medical conditions in his native country, and organized a number of baseball camps for them, using the game to help them with social skills and reintegration, in addition to being provided with medicines and proper care. The camps also served to increase the community's awareness of the needs - and capabilities - of handicapped children and help to break down some of the stigma still associated with handicaps. He received support for his work from a number of fellow Dominican ballplayers, such as Tony Fernandez and Pedro Martinez.