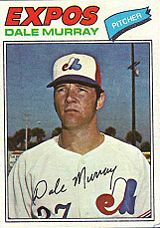 Dale Murray and Dale Murphy were contemporaries, but only one was a pitcher. Dale Murray pitched twelve seasons in the big leagues, primarily in the National League, and appeared in 518 total games, leading the league in 1976 by showing up in 81 games. Murray had 60 saves total in a big league career almost exclusively devoted to relief pitching (only one of his appearances came as a starting pitcher).

Murray was born in Cuero, TX, east of San Antonio, TX. He was drafted in the 18th round of the 1970 amateur draft by the Montreal Expos out of Blinn College, a hundred miles northeast of Cuero. Don Baylor had attended there a few years earlier.

Dale worked his way up the Expos minor league organization from 1970 to 1974, relieving mostly in 1970-1972 but becoming a starter with the 1973 Peninsula Whips. He then was a very successful reliever with the Memphis Blues early in the 1974 season and made his major league debut in July with the Expos. He was immediately good, posting a 1.03 ERA in 30 games while getting 10 saves in half a season as the team's closer.

He pitched his first full season in 1975, appearing in 63 games, getting 9 saves and putting up a win-loss record of 15-8, which easily led the team in victories. In fact, his 15 relief wins are one of the highest total ever. In 1976, he led the league in games pitched, getting 13 saves. In both 1975 and 1976, the Expos were a last-place team, and they needed some help, which is why they traded him and their lone All-Star, Woodie Fryman, to the Cincinnati Reds to get Tony Perez and Will McEnaney before the 1977 season. He spent that year with the Reds, appearing in 61 games with 4 saves and a 7-2 record, but an ERA of 4.94. Early in the 1978 season, he was again traded, this time for Ken Henderson, and he spent most of the season with the New York Mets, putting up some good numbers. All told, he appeared in 68 games that year between the two teams, getting 7 saves to go along with a 9-6 record and an ERA of 3.78.

He pitched five months for the Mets in 1979 before the Expos bought him back for the stretch drive, and overall that season he was in 67 games with 5 saves, going 5-10, 4.57. He pitched a lot better for the Expos, putting up an ERA of 2.70 in 9 September outings as the Expos battled the Pittsburgh Pirates for the division title until the last day of the season. It was also his fifth straight season of pitching over 100 innings in relief, a remarkable feat, but also one that took a toll on his arm. The Expos kept him for part of 1980, but he was largely ineffective and they released him near the end of August after he had appeared in 16 games with a 6.14 ERA. He also pitched well in the minors that year in 16 games with the Denver Bears. However, now on the wrong side of 30, he looked like he was nearing the end of the line, but he would find a second wind in the American League.

1981 found him in the Toronto Blue Jays organization. He pitched mostly for the Syracuse Chiefs, getting 16 saves, but came up to the big league Blue Jays for 11 games near the end of the year and recorded a 1.17 ERA. He continued with the Blue Jays in 1982, getting 11 saves in 56 games, going 8-7, 3.16 and pitching 111 innings. The Blue Jays cashed in that great performance by trading him after the season to the New York Yankees, in a deal that brought three solid major leaguers, Dave Collins, Fred McGriff and Mike Morgan, to the Blue Jays. However, Dale's time in pinstripes was not great. He pitched 40 games in 1983 with one save and an ERA of 4.48, then 19 games in 1984 with no saves and an ERA of 4.94. He pitched three more games for the Yankees at age 35 in 1985 before getting released and signed by the Texas Rangers, for whom he appeared in the final major league game of his career on May 13th. He mostly pitched in the minors that year with the Oklahoma City 89ers, appearing in 26 games with a 2.83 ERA and 8 saves, then called it a career.