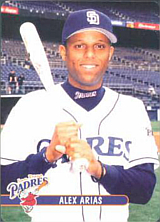 Alex Arias batted .320 as a pinch hitter during his big league career, tied for the highest mark of any batter (minimum 150 at bats) with Tommy Davis.

He batted for a career high .303 with the Philadelphia Phillies in 1999. That year, he led the National League in pinch hitting with a .545 average (12 for 22); this is a remarkable achievement as he stepped in to replace Desi Relaford at shortstop after Relaford injured his wrist. Arias continued in a starting role until Relaford's return in early September. Had he been given the opportunity for a few more starts after Relaford returned to the starting lineup, Arias would have finished second in fielding percentage for shortstops.

He was the last member of the Phillies to start a triple play at Veterans Stadium. In fact, he started triple plays in back-to-back years; the first was against the New York Mets at the Vet and the second came against the San Francisco Giants.

After his major league career ended, he was a player/coach for the Yuma Scorpions of the Golden Baseball League in 2005 and joined the coaching staff of the Frederick Keys of the Carolina League in 2006. He was named manager of the Bluefield Orioles for 2007.