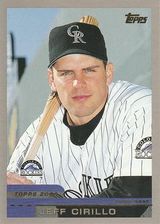 Jeff Cirillo was an excellent contact hitter with significant gap power who hit .296 during a 14-year career.

Despite his success, Cirillo was often overlooked by fans and media. Even though he hit at least .313 in five different seasons, belted 40-plus doubles three times, and drove in 80 or more runs in five seasons, Cirillo only made two All-Star teams in his career. He sports a career 796 OPS but, during his prime from 1995-2001, he clocked in at 847. He became eligible for election to the Hall of Fame in 2013 but did not receive any votes and was dropped from the ballot.

Jeff later became a scout for the Diamondbacks and Los Angeles Angels of Anaheim. He also briefly was a broadcaster for Brewers games.