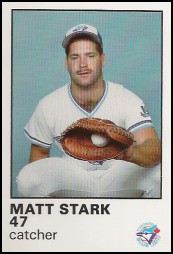 Matt Stark was a high draft selection, the 9th overall pick in the 1983 June draft by the Toronto Blue Jays, but he never got much playing time at the big league level. He played in 5 games with the Blue Jays in 1987, collecting his first major league hit on April 8th in his second career at bat. The pitcher was Greg Swindell. He next appeared in the big leagues as a September call-up with the Chicago White Sox in 1990. He was 4 for 16, including a two-run double on September 13th against Tom Bolton of the Boston Red Sox. It was the only extra-base hit of Stark's major league career.

Stark suffered a whole range of injuries during his career [1].

Matt also had a long pro career outside of the majors. He played parts of four seasons for the Knoxville Blue Jays while in the Toronto organization, and spent a couple seasons in the minors of the Chicago White Sox organization, where he was a teammate of Frank Thomas with the Birmingham Barons in 1990. Matt hit .309 with 14 home runs while Frank hit .323 with 18 home runs that season, with both coming to the majors for part of the season. Matt was briefly in the California Angels organization in 1992 (hitting .377), but spent most of the 1990's with Mexican teams, also spending part of one season in Taiwan. When he briefly came back to the USA to play independent ball, he hit .404 in 31 games in 1994 (and also played a few games for the same team in 1995). In all, he had 16 seasons in pro ball.