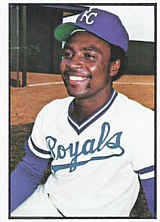 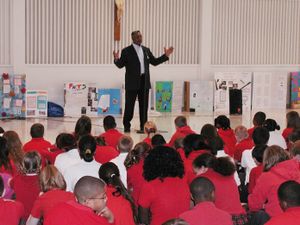 White speaks to students in 2009

Second baseman Frank White spent all eighteen years of his career with the Kansas City Royals. He holds the franchise record with eight Gold Gloves. After stints as a member of the Boston Red Sox (1994-1996) and Royals (1997-2001) coaching staffs, he served as the manager of the Wichita Wranglers, the Royals Double A affiliate. He resigned his post in the Royals front office in 2011 and was elected to public office in Jackson County, Missouri in 2014. A Democrat, he first won a seat in the county legislature, then moved up to county executive in 2016.

He is the most successful graduate of the Kansas City Royals Baseball Academy - established by team owner Ewing Kauffman and run by Syd Thrift. The purpose of the Academy was to refine the skills of athletically-gifted prospects who had been neglected by other major league teams because they had not played much baseball in high school or college. Like many of the Academy's projects, Frank White had not been drafted; but he was developed into one of the leading second basemen of his generation.

During the 1985 World Series, he became the first second baseman to bat cleanup in a Fall Classic (and second in history) since Hall of Famer Jackie Robinson. His solo home run off Astros ace Mike Scott in the 7th inning of the 1986 All-Star Game proved the difference in a 3-2 American League triumph. He hit for the cycle twice in his career, on September 26, 1979 against the California Angels and again on August 3, 1982 against the Detroit Tigers.

White's #20 was retired by the Royals in 1995, the same year he was inducted into the team's Hall of Fame.

White has been a coach for the Kansas City T-Bones of the new American Association since 2012.