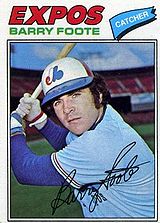 Catcher Barry Foote played a decade in the majors, initially showing much promise but ending his career as a journeyman.

Foote was selected by the Montreal Expos in the first round of the 1970 amateur draft with the third overall pick. He made his pro debut that summer with the GCL Expos, hitting .266 with 3 home runs in 46 games. In 1972, he hit .253 with 16 homers for the AA Quebec Carnavals, and he posted a .262 average to go along with 19 home runs for the AAA Peninsula Whips the following summer. This earned him a September call-up to Montreal in 1973, and he went 4-for-6 in 6 appearances as a pinch hitter.

Foote was installed as Montreal's starting catcher in 1974, hitting .262 with 11 home runs, and was named to the 1974 Topps All-Star Rookie Team. He also led the National League in sacrifice flies that first season. His solid play caused the Expos to shift another young catcher, Gary Carter, to right field when he came up in 1975, but Foote's performance diminished over the following two seasons. New Expos manager Dick Williams picked Carter as his starting catcher prior to the 1977 season, relegating Foote to the bench.

Traded to the Philadelphia Phillies during 1977, Foote became a seldom-used backup catcher behind Bob Boone and Tim McCarver (the latter was used as the "personal catcher" for Steve Carlton). Dealt to the Chicago Cubs in 1979, he had one more solid season (.254, 16 home runs) but spent the next year splitting time behind the plate with Tim Blackwell. In early 1981, he was traded to the New York Yankees for Tom Filer. He saw limited playing time with the Yankees as a backup to Rick Cerone but made one appearance in the 1981 World Series, striking out in Game 4 against Steve Howe of the Los Angeles Dodgers. He finished his career with the Yankees in 1982.

After retiring, Foote became a minor league manager for the Yankees and the Toronto Blue Jays. Later, he was a Chicago White Sox coach in 1990 and 1991 and a member of the New York Mets staff in 1992 and 1993.