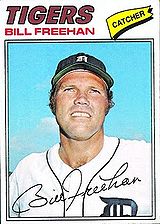 Bill Freehan was one of the top catchers of his era. He played his whole major league career with the Detroit Tigers, excelling in both hitting and fielding. He won five Gold Gloves and was an All-Star eleven times. He was once second in the MVP voting and once third.

Freehan's stats are more impressive than they look, because he played during the second dead-ball era. For instance, in 1968 when the American League hit .230, Freehan's .263 was only eleven points away from the tenth best batter in the league. In 1967, his .282 average was ninth in the AL, and his .300 in 1964 was sixth in the AL.

He was also a master in getting hit by the pitch, leading the league three times.

He was the head coach at the University of Michigan from 1990 to 1995. He had attended Michigan in 1961, the year that the Tigers signed him. After retirement he served as president of an automobile manufacturers representative agency and was a commentator on Tigers television broadcasts in 1984 and 1985. From 2002 to 2005, he was a coaching instructor in the Tigers' organization.