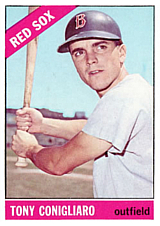 Tony C and the Career That Wasn't[edit]

“Don’t change that solid stance of yours, no matter what you’re told.” - Ted Williams, to Tony Conigliaro

One of baseball's most tragic cases, Tony Conigliaro is one of the all-time fan favorites in the history of the Boston Red Sox. He was young, attractive and a local boy, hailing from the North Shore just outside of Boston. He soared high, winning a home run title at 20. Two years later, his career and life were irreparably altered.

His promising young career took a devastating turn on August 18th that year. Facing California Angels hurler Jack Hamilton, he was hit in the left cheekbone by a fastball and carried off the field on a stretcher. He suffered a fracture in his cheekbone, a dislocated jaw and severe damage to his left retina. Tony would not return until 1969, making a remarkable showing by belting 20 home runs in 141 games and joining his brother, Billy Conigliaro, in the Red Sox outfield. In 1970, he had an amazing season in which he batted .266/.324/.498 with 36 home runs and 116 RBI. Boston promptly flipped him to the California Angels for Doug Griffin and a pair of Tatums: Jarvis and Ken (who had his own ties to terrifying beanings, having struck Paul Blair of the Baltimore Orioles during the 1970 season). Tony was not the same in 1971, when he hit just .222 with 4 homers in 74 games and called it quits by mid-season. After sitting out the next three years, he made a brief comeback in 1975 but hit just .123 in 21 games back in Boston.

Tony was active off the diamond. He recorded an album of songs during the height of his popularity in 1965. In retirement, he worked as a sports anchor for local affiliates in Providence and San Francisco. He had interviewed with Channel 38, home of the Red Sox, for the chance to replace Hawk Harrelson in the 1982 season. He suffered a stroke two days later, suffering brain damage, and spent the rest of his life in the care of his parents and brother Billy. He died of pneumonia and kidney failure in February 1990 at just 45. The Red Sox wore black armbands in his honor that season, making him an inaugural inductee to the club's Hall of Fame in 1995. Shortly after his death, the Tony Conigliaro Award was established to reward the big leaguer that best overcame obstacles and adversity in the spirit of Tony C.

Who knows what Tony could have done if he had never been hit in the face? If you carry his average numbers over the course of a 20-year career, his numbers are quite impressive. Although this type of analysis is conjecture at best, one could imagine Tony C with between 500 and 600 home runs. Here is some theoretical evidence. He averaged a home run for every 17.62 at bats before his injury. He had already logged 104 home runs at that time at the age of 22. If he had been able to play until the age of 38 while maintaining similar numbers and staying reasonably healthy, is it doubtful that he would have been among the top ten in career home runs? Of course, this is all up for debate. We will never know. We can only appreciate the brief career for what it was. This "what if" scenario came to mind after a brief conversation I had with Bill Monbouquette before a minor league game when he was the pitching coach for the Oneonta Tigers. He was Tony's teammate during the 1964 and 1965 seasons. During the conversation, he told me of the times that he would tell Tony how to avoid an inside pitch. Tony's tendency was to always open up toward the pitcher to avoid a pitch thrown inside. Bill would tell him numerous times to turn away from the pitcher and toward the catcher, thus protecting himself and exposing only his backside to the pitch. If you take a look at the pictures of the night of his injury, he did not follow Mr. Monbouquette's advice. If only... --D.A.S. 16:23, 27 Jul 2005 (EDT)