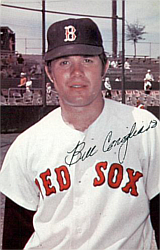 “Billy Conigliaro is a ballplayer of great talent and potential. We need an outfielder. There is no reason in the world why Billy could not have a fine season playing for us.” - Dick Williams, Oakland Athletics manager, to the Boston Herald, November 27, 1972

Brother of Tony Conigliaro, Billy Conigliaro played five seasons in the major leagues, finishing his career with the 1973 World Series winners, the Oakland Athletics. He had two knee surgeries during the 1973 season and was released the following spring.

A first round pick in the 1965 amateur draft, Billy found out about being drafted because Tony, who was already starring for the Boston Red Sox by then, came to Billy's graduation to announce it on the stage. His first minor league team was the Waterloo Hawks of the Midwest league in 1965. He came up with the Red Sox in 1969 and slugged .563 in 80 at-bats during the second dead-ball era. From 1969 to 1971 he played outfield with the Red Sox, along with Carl Yastrzemski, Reggie Smith, and his brother. In 1970, the two Conigliaros hit 54 home runs between them. Both Tony and Billy were high-profile players. Tony, of course, was a slugger who started strong with the Red Sox in 1964 and won the home run championship in 1965. Billy started strong and, in 1971, was eighth in the league in doubles even with only 351 at bats.

Billy bought his ticket out of Beantown for being highly critical of his brother being dealt to the California Angels on the heels of a 36-home run season in 1970. The Sox bundled him in a ten-player deal to the Milwaukee Brewers, where he retired in mid-season in 1972. The Oakland Athletics were able to coax him back for 1973, his final big league season. He hit .200 in 48 games then made 3 hitless trips to the plate in the World Series, winning a ring in the process.

Per the New York Times, after Tony had his heart attack which caused brain damage in 1982, Tony lived in his parents' home and in Billy's home, which was next door. Billy cared for his brother until his death in 1990. Billy was also an amateur astronomer.[1]