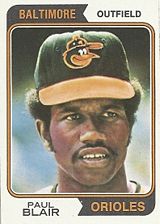 "I was taught to play defense. Back in our day it was pitching and defense. Our philosophy (the Oriole way) was don't make the little mistakes that cost you ballgames. That is the way we won over such a long period of time." - Paul Blair, to USA Today Baseball Weekly, 1997

Outfielder Paul Blair was best known for his defensive prowess, winning eight Gold Gloves over a seventeen year big league career, but also starred at the plate in the postseason for the Baltimore Orioles and New York Yankees.

After attending Manual Arts High School in L.A., Blair was signed by the New York Mets. He played his first pro season with the Santa Barbara Rancheros of the California League in 1962 and hit just .228 before being drafted by the Orioles following the season. After spending another year in the California League, he was with the Elmira Pioneers for most of the 1964 season and led the Eastern League with a .311 average and 34 stolen bases. He attended East Los Angeles Junior College while playing in the minors. Blair reached the majors with Baltimore late in the 1964 season and took over as the O's regular center fielder the following summer. The club reached the 1966 World Series and Blair starred at the plate and in the field. In Game 3, he hit a home run to give the team a 1-0 win, and in the following game, he robbed Jim Lefebvre of a potential inside-the-park home run to help the Orioles sweep the Los Angeles Dodgers.

Blair continued to improve at the plate in 1967, hitting .293 and leading the American League with 12 triples while winning his first Gold Glove. However, the next year his average dropped to just .211. He bounced back in 1969, hitting .285 with a career-best 26 homers and earning a spot on the All-Star team as well as his second Gold Glove. He also starred for the Orioles in the American League Championship Series, driving in the winning run in Game 1 and going 5-for-6 with a homer and a pair of doubles in Game 3 as Baltimore swept the Minnesota Twins. Early in the 1970 campaign, Blair hit three home runs in a game against the Chicago White Sox on April 29th, but missed nearly a month of the season after being hit in the face by a Ken Tatum pitch in a May 31st game against the California Angels. He struggled at the plate for a while after returning but returned to form by that year's World Series, going 9-for-19 as the Orioles beat the Cincinnati Reds in five games.

Blair remained the Orioles regular center fielder for the next several seasons, but by 1976, his average dipped to .197. In January 1977, he was traded to the New York Yankees. He saw less playing time in New York but still managed to star in the postseason, driving in the game winning run in Game 1 of the 1977 World Series and batting .375 in the 1978 World Series to add another pair of championships to his resume. Blair was released by the Yankees early in the 1979 campaign and signed with the Cincinnati Reds but became a free agent after hitting just .150 for the Reds in 75 games. He began the 1980 campaign as a minor league instructor for the Yankees but returned to the majors with the club for a dozen games in June, primarily as a late-inning defensive replacement. In 1989, Blair played for the Gold Coast Suns of the Senior Professional Baseball Association and hit .200 in 17 games with the club.

Following his playing days, Blair was the head coach at Fordham in 1983 and spent time as a minor league coach with the Rochester Red Wings and in the Houston Astros organization. He was later the coach at Coppin State for five years, from 1998 to 2002.

Blair was portrayed by actor Seth Gilliam in ESPN's 2007 miniseries The Bronx Is Burning. His son, Paul Blair III, played eight years in the minor leagues for the San Francisco Giants and Chicago Cubs. While participating in a celebrity bowling tournament on the day after Christmas 2013, Paul suffered a heart attack and lost consciousness. He was later pronounced dead at Sinai Hospital in Baltimore. He was 69.