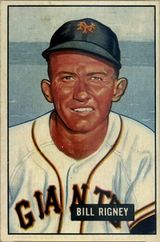 Bill Rigney played eight seasons in the majors and managed for eighteen. He was a broadcaster for the San Francisco Giants and Oakland Athletics. He also scouted and was briefly in the front office for the A's.

Before his major league days he played for a semi-pro team sponsored by his family, and then later for the Oakland Oaks. Rigney's entire playing career in the majors was with the New York Giants. He was the same age as outfielder Sid Gordon. Bill didn't come to the majors until age 28, mainly because he missed 1943-1945 while serving his country in the Coast Guard during World War II.

Rigney played a lot of middle infield, appearing at second base a bit more often than at shortstop or third base.

He was managing the Giants by the time he was age 38, and went with them to San Francisco in 1958. He was manager when Orlando Cepeda, Willie McCovey, and Juan Marichal broke in. Later, he managed the expansion Los Angeles Angels for their first nine years (1961-1969). His only championship was a division winner with the Minnesota Twins in 1970, a team which featured Rod Carew, Harmon Killebrew, Tony Oliva, Jim Kaat, and Bert Blyleven.