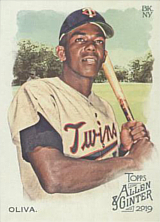 Tony Oliva was a three-time batting champion and eight-time All-Star in his fifteen-year career, spent entirely with the Minnesota Twins. The 1964 AL Rookie of the Year recorded a career .304 batting average through the heart of baseball's second dead-ball era, and was generally regarded as a Hall of Fame-caliber player during his playing days.

Born in Cuba the same year as Jose Tartabull and Leo Cardenas, Oliva was signed by Twins scout Joe Cambria in 1961. Arriving in the United States unable to speak English, he let his bat do the talking, posting a .410 average with 10 home runs and 81 RBI for the Wytheville Twins in 64 games that summer. He spent most of 1962 with the Charlotte Hornets of the South Atlantic League, hitting .350 with 17 homers and 93 RBI before earning a September call-up to the majors. He made his big league debut on September 9th and got his first hit in the majors five days later, doubling off Dick Donovan of the Cleveland Indians. Overall, he went 4 for 9 with 3 RBI and 3 runs scored in his first taste of major league action. In 1963, he hit .304 with 23 home runs for the Dallas-Fort Worth Rangers before making several late-season appearances for Minnesota. 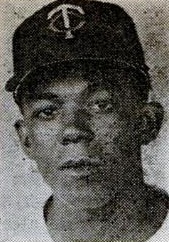 Oliva was given the Twins' regular right field job in 1964, and responded by putting together a tremendous rookie campaign. He led the American League with a .323 average, 217 hits, 109 runs scored, and 43 doubles, while slugging 32 homers. He easily won the 1964 American League Rookie of the Year Award, finished fourth in Most Valuable Player voting, and was selected to start in the All-Star Game. He hit .321 the next year to pace the AL again, becoming the first man to win a batting crown in his first two seasons. He finished second to teammate Zoilo Versalles in MVP voting as Minnesota captured the American League pennant. His bat went cold in the World Series, as he hit just .192 as his team fell to the Los Angeles Dodgers in seven games.

Oliva's .307 average in 1966 was second to AL Triple Crown winner Frank Robinson's .316, and his 191 hits led the AL for the third straight summer. He finished sixth in Most Valuable Player voting and won the only Gold Glove of his career that year. He led the American League with 34 doubles the following season, and after missing the last month of the 1968 campaign, he bounced back and led the league with 39 doubles and 197 hits in 1969. In 1970, he hit .325, (a career-best up to that point), paced the AL again with 36 doubles and 204 hits, and once more finished second in MVP voting (this time to Boog Powell).

Despite missing time with a knee injury, Oliva hit .337 to win his third batting crown in 1971. Due to lingering effects of his knee problems, he was limited to just 10 games the following year. Fortunately for him, the designated hitter rule went into effect in 1973 and he was able to bounce back at the plate without having to play the field. He hit .291 with 16 home runs that year and put up comparable numbers the next two seasons. After hitting just .211 in 1976, he retired as a player.

In Hall of Fame voting, Oliva peaked in 1988 with just over 47% of the vote. In the 2007 voting by the Veterans Committee, he finished with 57% of the vote out of the 75% necessary. The injuries at the end of his career have hurt him - even though he played 15 seasons through age 37, he had fewer than 2,000 hits. Of the ten most similar players according to the similarity scores method, only #10 is a Hall of Famer, and that is George Kelly, often criticized as a below-par selection to the Hall. The most similar player is Carl Furillo, although Furillo played in a hitter's park before the second dead-ball era, while Oliva played in the heart of that era. Another of the most similar players, Pedro Guerrero, is an interesting and good comparison, since Bill James once called Guerrero the best hitter of the 1980s. In the 2015 Hall of Fame Election held by the Veterans Committee, he missed election by only one vote, receiving 11 of 16 votes when 12 were needed for election.

Oliva's number 6 is retired by the Twins, and he was elected to the Twins Hall of Fame in the inaugural 2000 class. He was inducted into the Latino Baseball Hall of Fame as part of its 2012 class.

Oliva was a player/coach in his final year with the Twins and remained on their staff through 1978. After spending the next six years as a minor league coach, he was back on the Twins staff from 1985 to 1991. Since then, he has been a minor league hitting instructor.

Oliva's brother Juan Carlos Oliva was a star pitcher back in Cuba.