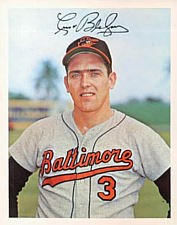 "Blefary was giving me the business tonight. The first time he played in the big leagues he hit against me. It was after my arm trouble had started, and I must say I wasn't throwing very well. Anyway, it was great for Blefary. 'Bulldog,' he said, 'you made my big league debut a success. There I was in Yankee Stadium, on national television, with all my friends and relatives looking on, and I hit that blooper pitch of yours into the upper deck with two dudes on base. Thank you, Bulldog." - Jim Bouton, Ball Four

Curt Blefary, the 1965 American League Rookie of the Year, burst onto the scene with several strong seasons but could not keep it up and finished with eight years in the majors. He showed some power and an ability to draw walks, a valuable commodity during the hit-scarce second dead-ball era.

On May 4, 1969, playing first base for the 'stros, Curt participated in 7 double plays in a 9-inning game, the all-time major league record for a nine-inning game by a first baseman. The visiting San Francisco Giants grounded into double plays to end the 1st, 3rd, 7th and 9th innings. There were also ground ball double plays in the 4th, 5th and 8th. Dooley Womack was on the mound for the first four double plays; Fred Gladding was pitching for the last three. Astros second baseman Joe Morgan and shortstop Denis Menke each participated in five. This is also the 9-inning game record for most double plays at those positions, and the Astros won the game, 3-1. 1969 was Curt's last full-time season in the bigs, playing 155 games and batting .253/.347/.393 with 12 home runs. He was dealt to the New York Yankees for Joe Pepitone in the offseason and played part-time in his final three seasons spent with three teams.

Blefary died in January 2001 at 57. He had suffered from chronic pancreatitis, among other ailments.