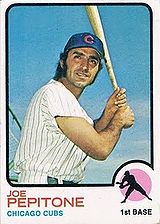 Joe Pepitone was the focus of much attention during the time that he played for the New York Yankees. A flashy, often unpredictable free-spirit who could play outfield or first base, he broke in during the 1962 season at age 21, and then in 1963, 1964, and 1965, he was named to the All Star team, primarily because of his power. In 1963 and 1964, the Yankees went to the World Series. All of that combined to make him a big star when he was still in his early and middle 20's.

While his batting averages in the 1960s don't appear very impressive, they are better than they seem because it was the second dead-ball era. For instance, in 1968 when he hit .245, the league hit only .230 and the Yankees hit (believe it or not) .214. Pepitone's .245 average was the second highest average on the Yankees of players with at least 200 at-bats. He also had a few good years with the Chicago Cubs.

He played for the Yakult Atoms in Japan in 1973 and is known as one of the biggest busts in Nippon Pro Baseball history. He played in only 14 games and hit .167 before eventually jumping the team.

During his playing career, Pepitone had the reputation of being a "playboy" who spent too much time on the New York nightlife. He also ran up a large amount of personal debt. He had the talent to earn close to six figures but his salaries were far less. Pepitone admits to these things in his autobiography, Joe, You Coulda Made Us Proud.

He was a New York Yankees coach in 1982 and also worked in the Yankees front office in the 1980s.