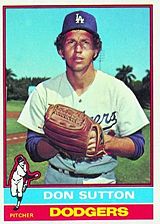 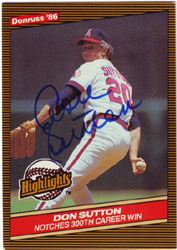 Don Sutton played for five major league teams and was elected to the Hall of Fame in 1998. Sutton was a model of consistency and durability throughout his 23-year career. He won 324 games and struck out 3,574 batters, while never missing his turn in the pitching rotation for the Los Angeles Dodgers, Houston Astros, Milwaukee Brewers, Oakland Athletics and California Angels. A four-time All-Star, he reached double figures in wins in 21 of his 23 seasons and struck out over 100 batters in each of those 21 campaigns. He pitched in 4 World Series.

Sutton's career lasted long enough that he was a teammate both of Sandy Koufax (in 1966), and Ramon Martinez (in 1988).

Sutton had the good fortune to break in with the Dodgers in 1966, when Koufax, Don Drysdale and Claude Osteen were the other starting pitchers. Sutton went 12-12 on a pennant-winning team. He pitched with the Dodgers from 1966 to 1980, winning 20 games only once, but always winning in double figures. He was named to four All-Star teams as a Dodger, and appeared in three more World Series with them. Each year from 1972 to 1976, he was in the top five in the Cy Young Award voting. He won the ERA championship in 1980, his last year with the Dodgers before going to the Houston Astros as a free agent, signing a $2.85 million, 4-year contract.

In 1982, during his second season in Houston, Sutton was traded at the deadline to the Milwaukee Brewers for Kevin Bass, Frank DiPino and Mike Madden. Sutton went 4-1 with the Brewers during the last part of the 1982 regular season, including winning the final game of the season against the Baltimore Orioles against another Hall of Famer, Jim Palmer with the Orioles and Brewers tied and in a winner-take-all game. Sutton threw 8 innings, gave up 8 hits and 5 walks (and was warned before the 3rd inning by home plate umpire Don Denkinger after scuffed balls were noted), but only surrendered 2 runs with Ben Oglivie, Cecil Cooper and Charlie Moore all making run-preventing plays. Sutton went on to be effective in the playoffs, but was bombed by the St. Louis Cardinals in the World Series.

After part of a season with the Oakland Athletics in 1985, he spent parts of three seasons with the California Angels, including their division-winning season in 1986. He finished his career with the World Champion Dodgers in 1988, although he was released in August, missing the run to the championship.

After his retirement, there was some debate whether he would be elected to the Hall of Fame, since his career had generally been seen as "good but not excellent". Sutton was also often accused of "scuffing" the baseball. Bill James wrote a strong defense of Sutton, pointing out that his career totals were far above those of many Hall of Famers. Sutton eventually was elected. Sutton's pitching credentials now seem secure. It's fortunate, however, that Hall of Fame pitchers aren't also required to be good hitters, as in 4 of Sutton's 23 major league seasons he failed to hit even .100, and he compiled a lifetime batting average of a lowly .144.

After retiring as an active player, Sutton served as a radio and television broadcaster for the Atlanta Braves (1989-2006, 2009-present) and the Washington Nationals (2007-2008). His son, Daron Sutton, has been a broadcaster for the Anaheim Angels and Milwaukee Brewers. His other son Don Sutton III, played professionally as well.

He was elected to the Baseball Hall of Fame on January 5, 1998 by the Baseball Writers Association of America. His #20 was retired by the Dodgers during that 1998 season. For his work as a broadcaster, he was inducted into the Braves Hall of Fame in 2015.

His first baseball card appearance was in the 1966 Topps set. He appeared as a panelist on the popular CBS game show Match Game on several occasions between 1976 and 1981.

Sutton passed away at his home after a long battle with cancer in January 2021. He had had several medical problems over recent years, including having a kidney surgically removed in 2002 because of cancer, and fracturing his left femur in 2019, an injury that ended his broadcasting career.