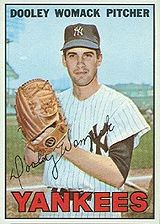 Dooley Womack was traded for Jim Bouton on August 26, 1969, thereby earning mention in Bouton's Ball Four: "I'd hate to think that at this stage of my career I was being traded even-up for Dooley Womack."

His brothers Alfred and Larry were minor league pitchers.

Womack spent quite a while in the minors before making his big league debut on April 14, 1966 for the New York Yankees against the Detroit Tigers in relief of pitcher Bob Friend. Womack pitched three solid innings, allowing a base hit and hitting two batters, but walking away unscathed. His collected his first career strikeout in that game - he struck out feared slugger Norm Cash.

On May 14, 1967, he won the game in which Mickey Mantle hit his 500th career home run. He struck out the final batter he ever faced, Jim Fregosi of the California Angels, pitching for the Oakland Athletics on September 27, 1970. His career was cut short by a torn rotator cuff.

According to the Similarity Scores method, he is most similar to pitcher Frank Funk (as of 2007).