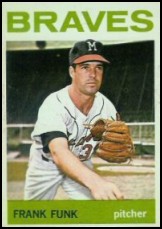 Frank Funk is best remembered for his 1961 season with the Cleveland Indians, when he won 11 games, lost 11 games, and had 11 saves. He pitched four years in the big leagues, and his ERA was well below the league ERA each year. All his appearances were as a reliever.