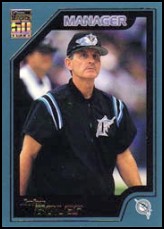 John Boles "Bolesy" played center field until an injury ended his playing career; he never made it to the minor leagues as a player. He then went on to serve as a college head coach at Saint Xavier College (1973-1979) and the University of Louisville (1980-1981). He managed several seasons in the minors. He was Manager of the Appleton Foxes in 1983 and named the White Sox Minor League Manager of the Year and was inducted to the Appleton Baseball Hall of Fame.

Boles was Farm Director of the Kansas City Royals from 1986 to 1988, the Montreal Expos from 1989 to 1990, and was part of the architecture of the expansion team, the Florida Marlins, from 1991 to 1998. He was manager of the Marlins twice; with his first major league game (and victory) coming on the road at the expense of Bobby Cox's Atlanta Braves. After several years working for the Los Angeles Dodgers (2002-2004), he moved to the Seattle Mariners front office. He was "Special Assistant to the Executive VP, Player Personnel" in 2008 and "Special Assistant to the GM – Player Procurement" in 2011. Boles returned to the Kansas City Royals for the 2012-2013 seasons to serve as the Senior Advisor to General Manager Dayton Moore, in the area of player development.

Boles is the father of minor league manager Kevin Boles.