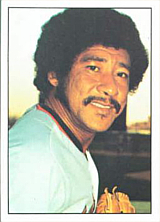 "Mike always thinks two pitches ahead. When they make an out on one of his set-up pitches he looks like they've spoiled his fun." - Elrod Hendricks, about Mike Cuellar 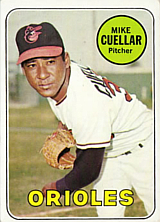 Mike Cuellar was one of the top pitchers of the 1960s and 1970s, winning 185 games over 15 big league seasons. Best known as a member of the Baltimore Orioles, he was co-winner of the 1969 American League Cy Young Award and a four-time twenty game winner with the club. His last name was often spelled "Cueller", especially in his first seasons.

Born in Cuba, Cuellar began his baseball career playing for an army team. He was signed by the Cincinnati Redlegs in 1957 and played in the minors for the Havana Sugar Kings from 1957 to 1960. He also made a pair of appearances in the majors with Cincinnati in April 1959, giving up 7 earned runs over 4 innings. After being released by the Reds, he pitched for the Monterrey Sultanes of the Mexican League in 1962 and played in the Detroit Tigers and Cleveland Indians chains the next summer. He was acquired by the St. Louis Cardinals prior to the 1964 season and went 6-1 for the Jacksonville Suns before being called up to the majors, where he was 5-5 in 32 outings.

Cuellar was back with Jacksonville to start 1965 and went 9-1 for the team. He was traded to the Houston Astros in June and appeared in 25 big league games for his new team. Although he went just 1-4, he was up in the majors for good. The next year, his 2.22 ERA was second-best in the National League - Sandy Koufax was first, Juan Marichal was third, Jim Bunning was fourth, and Bob Gibson was fifth. That summer, he went 12-10 on a team that posted a 72-90 record. In 1967, he put up a 16-11 mark on a club that was 69-93. He also made the All-Star team for the first time in his career that year. Following a sub-.500 1968 campaign, Cuellar was dealt to the Baltimore Orioles as part of the trade that brought Curt Blefary to Houston.

In his first year with the Orioles, Cuellar went 23-11 with a 2.38 ERA and shared the Cy Young Award with Denny McLain (the pair tied in the voting). He also made three postseason starts, including a complete game victory in Game 1 of the 1969 World Series against the New York Mets. He posted an even better record in 1970, going 24-8 while leading the American League in wins and complete games (21), but finished fourth in Cy Young voting behind Jim Perry, teammate Dave McNally, and Sam McDowell. In that year's World Series, he won the fifth and deciding game, hurling a complete game after giving up three runs to the Reds in the first inning.

Cuellar signed with the California Angels and appeared in a pair of games with the club in early 1977, giving up 7 runs in 3 1/3 innings. He later returned to the Mexican League, and he pitched for the Puerto Rico Boricuas in the short-lived Inter-American League in 1979. In 1989, at the age of 52, he played for the Winter Haven Super Sox of the Senior Professional Baseball Association.

One website, listing the 40 greatest Orioles of all time, lists Cuellar as the 11th greatest in history. His first baseball card appearance was in the 1959 Topps set.

Cuellar died of stomach cancer in an Orlando, Florida hospital on April 2, 2010, following a long illness.

As a hitter, he holds the record for the most career home runs (7) by a player with an OBP under .130. No one else has more than four.