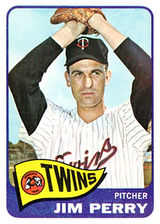 The brother of Hall of Fame pitcher Gaylord Perry, Jim Perry had a quite respectable pitching career himself. He won 20 games for the Minnesota Twins in 1969. In 1970, he went 24-12 for the Twins and won the Cy Young Award. The Perry brothers are the only set of brothers to both win Cy Young Awards.

Perry was named to three All-Star teams, and led the American League in victories two times that were ten years apart: in 1960 and again in 1970.

Jim was born three years before Gaylord and broke into the majors three years earlier. Having led the AL in victories with the Cleveland Indians in 1960, he was already a star when Gaylord broke in during the 1962 season. Late in Jim's career, he pitched on the same team with Gaylord: with the Indians in 1974, Gaylord won 21 and Jim won 17. Jim was 38 years old at the time. They also were both on the 1975 Indians, but neither was as effective.

Jim was born in Williamston, NC and attended college in North Carolina at Campbell University. He spent 1956 to 1958 in the minors, most notably going 16-8 for the Reading Indians in 1958. He had an impressive debut season in the majors, posting a 2.65 ERA in 153 innings for the Indians in 1959. If he had pitched enough innings, he would have finished third in the league.

Based on the similarity scores method, some of the most similar pitchers to Perry include Orel Hershiser, Hal Newhouser and Fernando Valenzuela.

He is the father of Chris Perry, a professional golfer. The baseball field at Campbell University, which was also used by the minor league Buies Creek Astros, is named in his honor.